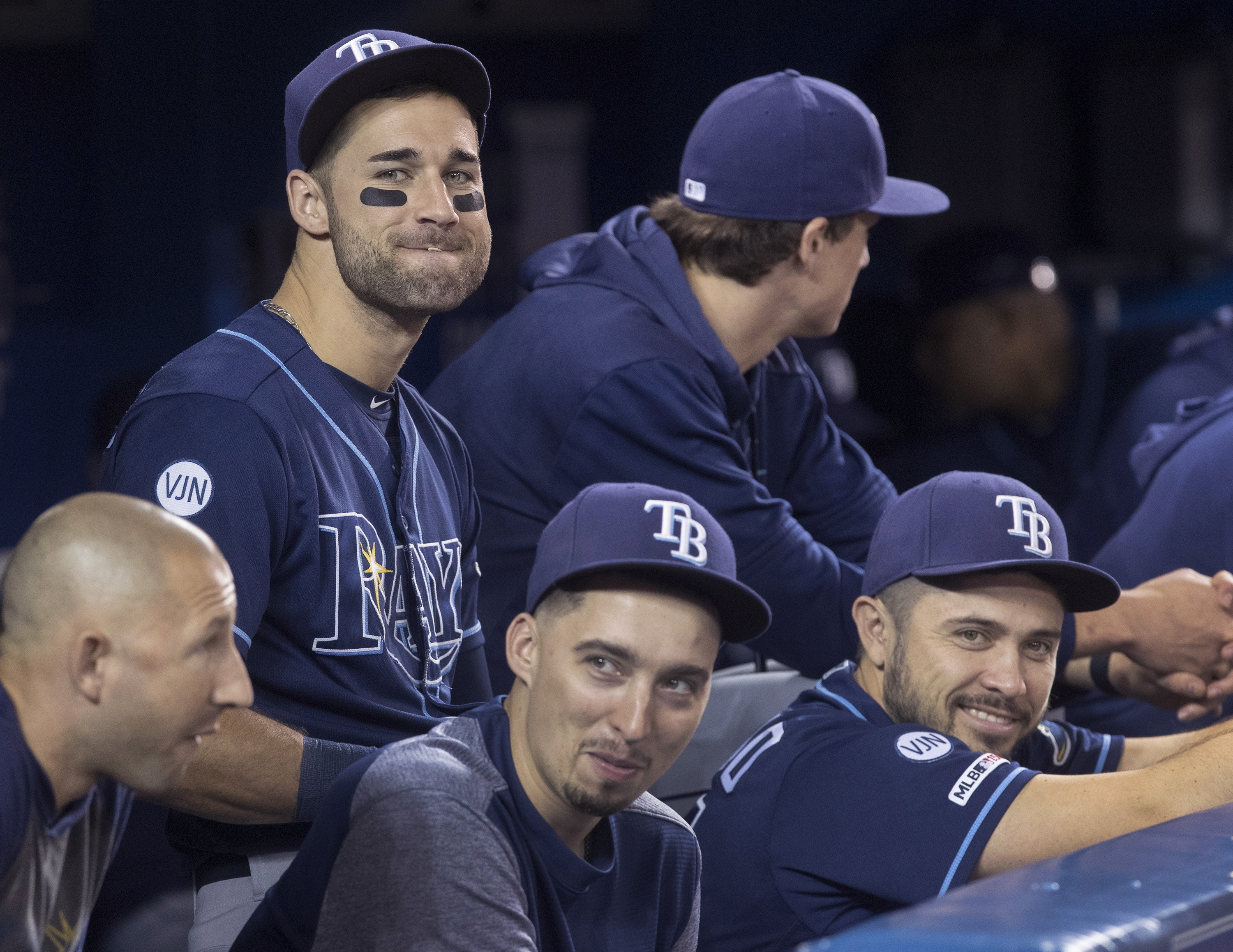 Major League Baseball’s average salary ahead of a postponed opening day remained at around $4.4 million for the fifth straight season, according to a study of contracts by The Associated Press.

Following an offseason when Gerrit Cole, Stephen Strasburg, Anthony Rendon and Christian Yelich all agreed to $200 million-plus deals, the flattened salary curve is evidence of a shrinking portion of the pie for baseball’s middle class. The stagnant stretch is unprecedented since the free-agent era dawned in 1976.

And that is before taking into account any decrease caused by a shortened season in 2020 due to the coronavirus pandemic.

In a throwback, the New York Yankees top payrolls for the first time since 2013 and tower over the Pittsburgh Pirates at $54 million -- the lowest of any big league team in six years.

FILE - In this Sept. 28, 2019, file photo, Tampa Bay Rays' Kevin Kiermaier, top left, relaxes in the dugout with teammates in the fourth inning of a baseball game against the Toronto Blue Jays in Toronto. Major League Baseball’s average salary as ope

Baseball Commissioner Rob Manfred remains confident there will be a season but is unsure when health conditions will allow training to resume.

MLB revenue is estimated to have increased at close to a 4% annual rate in recent years, but will drop sharply this year because of the impact of the new coronavirus. MLB’s 2021 revenue also will be impacted, according to Manfred.

FILE - In this May 22, 2019, file photo, Pittsburgh Pirates starting pitcher Chris Archer sits in the dugout during the bottom of the ninth inning of a baseball game on the way to losing to the Colorado Rockies in Pittsburgh. Major League Baseball’s

Scott Boras, the sport’s most powerful agent, says the disparity in rate of increase should be addressed in collective bargaining for the labor deal that replaces the contract expiring in December 2021.

“When the revenues are going up 15% and salaries are going up 1%, we’ve got to really calculate the rights valuation and look at it in a way that allows for those rights to be exercised differently,” he said.

While there were 878 players on rosters and injured lists at the start of the 2019 season, there were 899 players in the latest AP survey because teams had not yet trimmed to the active limit. The limit goes up this year from 25 to 26, and there could be an additional roster expansion following the disrupted spring training, which would impact the average.

Many teams have redirected money from the shrinking baseball middle class and toward the top of salary structures.

Forty-four players are at $20 million or more, up from 39 last year and topped by Los Angeles Angels outfielder Mike Trout. The three-time AL MVP is at $38.5 million when a prorated share of his signing bonus is added to his $36 million salary.

Cole is second at $36 million with the Yankees, followed by Washington pitcher Max Scherzer, who is at $35.9 million when factoring in his signing bonus and discounting deferred payments he won’t fully receive until 2028.

FILE - In this March 26, 2020, file photo, a statue of Pittsburgh Pirates Hall of Fame shortstop Honus Wagner stands in front of PNC Park, the home of the Pirates, in Pittsburgh. Major League Baseball’s average salary as opening day approached remain

Players who get at least $5 million and less than $10 million dropped from 120 to 102. Those making at least $2 million, but less than $5 million, fell slightly from 150 to 145. A few players at spring training with minor league contracts at that level are likely to be added to 40-man rosters if and when the season starts.

After signing Cole, the Yankees boosted their projected payroll to a team record of nearly $242 million as of March 28, up from $207 million at the start of last season and topping the previous club mark set in 2016. That includes $21.9 million for released outfielder Jacoby Ellsbury that is being contested in a grievance.

Boston topped payrolls the last two seasons and won a World Series title in 2018. The Los Angeles Dodgers had the highest payroll from 2014-17, ending the Yankees’ 15-year streak as baseball’s biggest spender.

The Dodgers are second at roughly $222 million, up from $191 million last year, after acquiring centerfielder Mookie Betts and left-hander David Price from Boston.

Pittsburgh cut its payroll from $77 million at the start of last season to a level not seen since Miami and Houston in 2014. Other teams near the bottom are Baltimore ($61 million), Tampa Bay ($69 million) and Miami ($71 million).

The AP’s figures include salaries and prorated shares of signing bonuses and other guaranteed income for players on active rosters and injured lists plus Minnesota’s Michael Pineda, who is on the restricted list and has 39 games remaining in a drug suspension. For some players, parts of deferred money are discounted to reflect current values.

Payroll figures factor in adjustments for cash transactions in trades, signing bonuses that are the responsibility of the club agreeing to the contract, option buyouts and termination pay for released players.