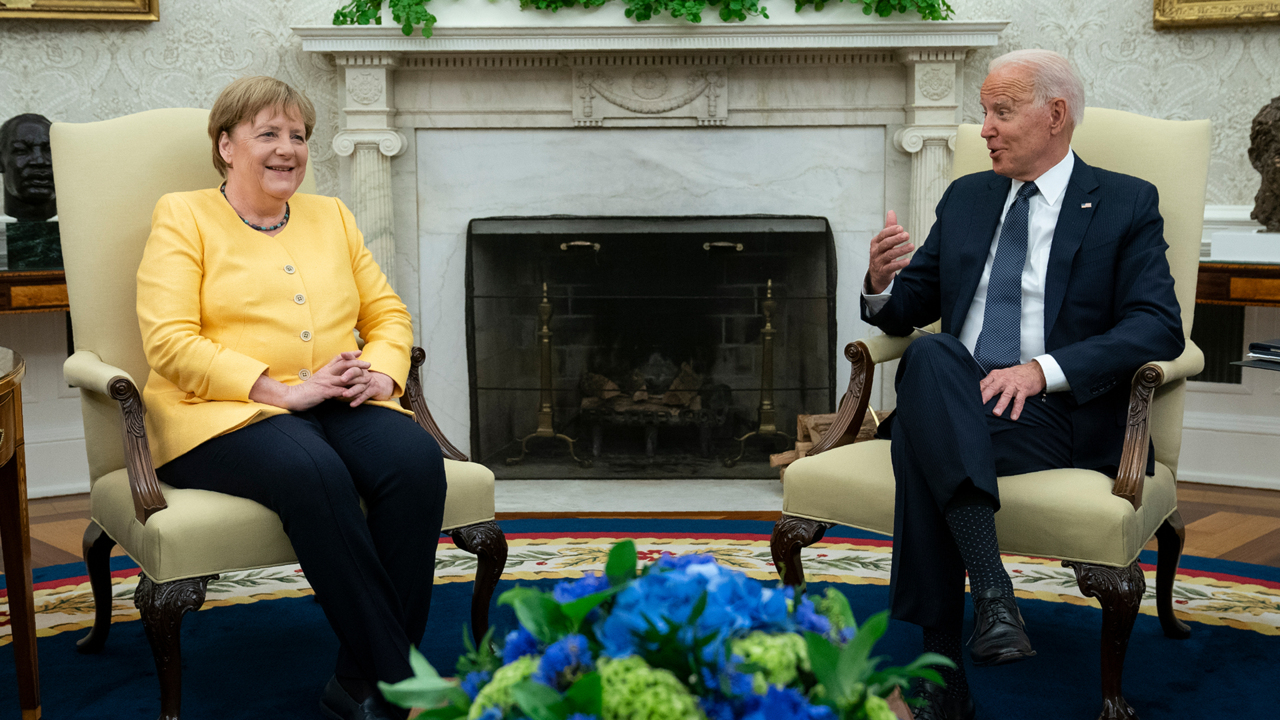 The outcome appeared to put Europe’s biggest economy on course for lengthy haggling to form a new government, while Merkel stays on in a caretaker role until a successor is sworn in. A three-party governing coalition, with two opposition parties that have traditionally been in rival ideological camps — the environmentalist Greens and the business-friendly Free Democrats — would provide the likeliest route to power for both leading candidates.

Only one of the three candidates to succeed Merkel, who chose not to run for a fifth term, looked happy after Sunday’s vote: the Social Democrats’ Olaf Scholz, the outgoing vice chancellor and finance minister who pulled his party out of a years-long slump.

GERMANY ELECTIONS: WHO WILL REPLACE ANGELA MERKEL? WHAT YOU NEED TO KNOW

Scholz said the predicted results were "a very clear mandate to ensure now that we put together a good, pragmatic government for Germany."

The Greens made their first bid for the chancellery with co-leader Annalena Baerbock, who fell well short of overtaking Germany’s two traditional big parties after a gaffe-strewn campaign. Armin Laschet, the governor of North Rhine-Westphalia state who outmaneuvered a more popular rival to secure the nomination of Merkel’s Union bloc, struggled to motivate the party’s base and made missteps of his own.

Both projections gave the Greens about 14% and the Free Democrats 12%.

MERKEL WARNS AGAINST SOCIALIST SWING AS GERMANS HEAD TO THE POLLS

"Of course, this is a loss of votes that isn’t pretty," Laschet said of results that looked set to undercut by a distance the Union’s previous worst showing of 31% in 1949. But with Merkel departing after 16 years in power, "no one had an incumbent bonus in this election," he noted.

Laschet earlier told cheering supporters that "we will do everything we can to form a government under the Union’s leadership, because Germany now needs a coalition for the future that modernizes our country."

Now it looks like both Laschet and Scholz will be courting the same two parties. The Greens traditionally lean toward the Social Democrats and the Free Democrats toward the Union, but neither ruled out going the other way.

The other option was a repeat of the outgoing "grand coalition" of the Union and Social Democrats that has run Germany for 12 of Merkel’s 16 years in power, but there was little obvious appetite for that after years of government squabbling.

"Everyone thinks that ... this ‘grand coalition’ isn’t promising for the future, regardless of who is No. 1 and No. 2," Laschet said. "We need a real new beginning."

GERMAN ELECTIONS, ECONOMY: WHAT TO KNOW

"About 75% of Germans didn’t vote for the next chancellor’s party," Lindner said in a discussion on ZDF television with all parties’ leaders. "So it might be advisable ... that the Greens and Free Democrats first speak to each other to structure everything that follows."

Baerbock insisted that "the climate crisis ... is the leading issue of the next government, and that is for us the basis for any talks ... even if we aren’t totally satisfied with our result."

While the Greens improved their support from the last election in 2017, they had higher expectations for Sunday’s vote.

Two parties weren’t in contention to join Germany’s next government. The Left Party was projected to win only 5%, the bare minimum needed to remain in parliament. The far-right Alternative for Germany — which no one else wants to work with — was seen winning around 11%, below the 12.6% showing that allowed it to enter parliament for the first time in 2017.

CLICK HERE FOR THE LATEST FOX NEWS REPORTING ON GERMANY

Merkel, who has won plaudits for steering Germany through several major crises, won’t be an easy leader to follow. Her successor will have to oversee the country’s recovery from the coronavirus pandemic, which Germany so far has weathered relatively well thanks to large rescue programs.

Laschet insists there should be no tax increases as Germany pulls out of the pandemic. Scholz and Baerbock favor tax hikes for the richest Germans and also back an increase in the minimum wage.

Germany’s leading parties have significant differences in their proposals for tackling climate change. Laschet’s Union bloc is pinning its hopes on technological solutions and a market-driven approach, while the Greens want to ramp up carbon prices and end the use of coal earlier than planned. Scholz has emphasized the need to protect jobs as Germany transitions to greener energy.

Foreign policy didn’t feature much in the campaign, although the Greens favor a tougher stance toward China and Russia.

Whichever parties form the next German government, the Free Democrats’ Lindner said it was "good news" that it would have a majority with centrist parties.

"All of those in Europe and beyond who were worried about Germany’s stability can now see: Germany will be stable in any case," he said.