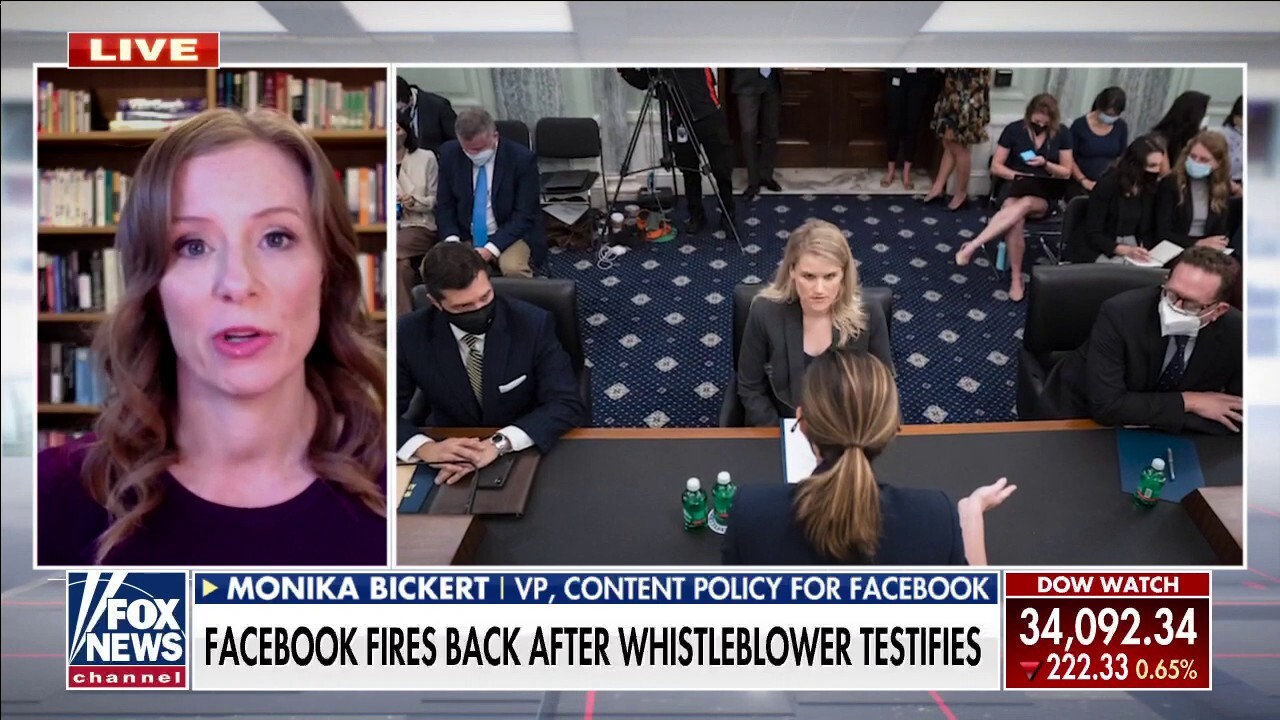 Monika Bickert argued Facebook whistleblower Frances Haugen did not work on child safety issues, suggesting she 'mischaracterized' the information she revealed from the platform.

An attorney for Facebook whistleblower Frances Haugen said Wednesday there was still "more to come" regarding her revelations about the company’s purported failure to address the harmful effects of its platforms.

Haugen, a former Facebook product manager, gathered thousands of documents detailing internal research on harm caused by the platform and later delivered damning testimony before a Senate panel. Haugen’s attorney, John Tye, said some of the revelations contained in her trove of documents have yet to surface.

"It’s obviously pretty substantial, and there’s been a lot of elements that haven’t even been reported yet, so there’s more to come," Tye said in an interview with the Washington Post.

Haugen’s documents formed the basis of a sweeping Wall Street Journal series called the "Facebook Files," which revealed internal research showing Facebook-owned Instagram had harmful effects on teenage girls. The whistleblower accused Facebook executives of having extensive knowledge of its platforms’ shortcomings but failing to take adequate steps to address them.

Tye said information obtained by Haugen regarding Facebook’s role in the events of the Jan. 6 Capitol riot "deserves more attention." Rep. Adam Schiff, D-Calif., a member of the Jan. 6 select committee, has indicated she will be called to testify.

"I’ve already been in touch with one member of the January 6 committee personally," Tye said.

He added that Haugen’s legal team is in contact with regulators in both the U.S. and abroad.

While testifying before Senate lawmakers, Haugen, who worked at Facebook for nearly two years, said the company’s "products harm children, stoke division and weaken our democracy."

"The company’s leadership knows how to make Facebook and Instagram safer but won’t make the necessary changes because they have put their astronomical profits before people," she added.

Facebook has pushed back on Haugen’s testimony, arguing she mispresented the company’s internal research as well as its response to its findings.

Some of the most pointed criticism came from Facebook CEO Mark Zuckerberg himself, who penned a lengthy post addressing Haugen’s testimony. He argued that Facebook cares deeply about public safety and has worked to address its platforms’ shortcomings.

"At the most basic level, I think most of us just don't recognize the false picture of the company that is being painted," Zuckerberg said. "Many of the claims don't make any sense."