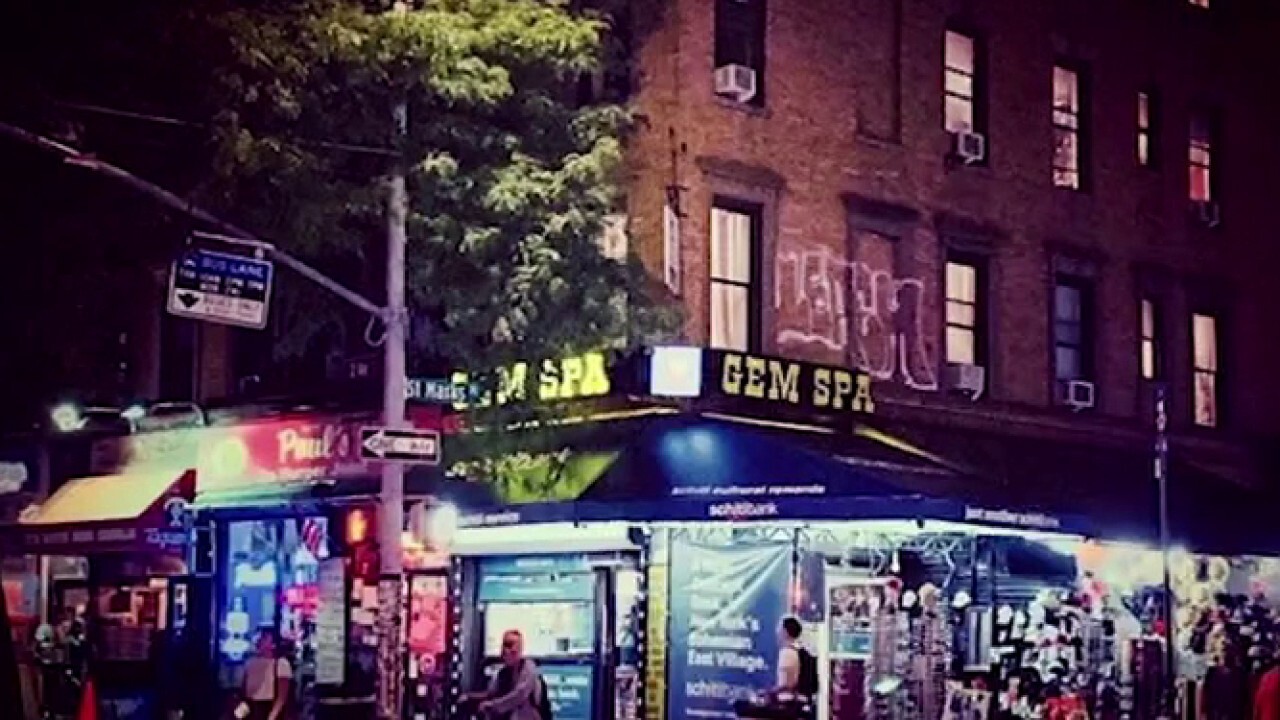 Parul Patel, the owner of Gem Spa, a nearly 100-year-old New York City corner store, said on Tuesday that she was forced to permanently close the shop because of the lockdowns implemented in an attempt to slow the coronavirus pandemic.

“It was heartbreaking,” Patel told “Fox & Friends” on Tuesday.

“We wish we could be there but the numbers just don’t make sense and it was just not a viable situation,” she added.

Gem Spa, which was located in the East Village neighborhood of Manhattan, has been a fixture at St. Marks Place and Second Avenue since the 1920s. Patel pointed out on Tuesday that “iconic figures that are part of our history” have had connections to Gem Spa.

She noted that “Madonna shot ‘Desperately Seeking Susan’ at our store” and that "The New York Dolls, which were the pioneers of punk rock, shot the back of their first cover in our store.”

East Village shop Gem Spa announced that it will permanently close on May 9, 2020 in New York City. (Photo by Bill Tompkins/Getty Images)

The iconic shop was forced to close for several weeks due to the city’s lockdown orders, Patel said, adding that during that time she realized it did not make sense to reopen.

Before the lockdowns, rent had increased and Gem Spa had also lost their license to sell cigarettes and lottery tickets, the Gothamist reported. Patel said after coronavirus lockdowns were implemented, the shop’s economic struggles were compounded and the legendary East Village shop announced that is was permanently closing in May.

In a statement Gem Spa said the decision to permanently close was “extremely difficult.”

“Coronavirus concerns closed our city, cratered businesses, and ultimately sealed the fate of our (close to) 100-year-old shop,” the statement said.

On Tuesday, Patel, the daughter of owner Ray Patel who had been running the shop because her father “was in and out of hospitals,” told “Fox & Friends” that “rent was accumulating” and “we had settled a lawsuit in January that basically allowed the landlord to evict us if we were late on rent twice.”

She added that “during the lockdown it was very difficult to make money through our website.

“We at least had a website but, the business from there was so nominal it would not have even come close to the $40,000 that we would have needed for the two months of rent,” Patel said.

She went on to say that she “tried to negotiate with the landlord for a rent freeze or a rent reduction, but they were unwilling to do that and they just simply said send whatever you can. However, one of the conditions of our lawsuit in January was that they could evict us if we were late on rent twice so I asked for assurance that we wouldn’t be evicted but, they couldn’t even assure us of that.”

Patel said because of all the factors, staying open was not a viable option.

She said it was a “heartbreaking” decision to have to say goodbye to her parents’ business.

“It was heartbreaking because this was his [Ray Patel’s] baby and we never thought that Gem Spa would not be part of our life,” Patel said. “It was always something that did well for us and beyond money, we had grown close to our customers as well. They had become family.”

She noted that Gem Spa has received a lot of “love and support” from customers.

“In fact, actually since closing we had a tremendous outpouring of love and people really showed us support by buying merchandise through our website,” Patel said.

A third of the city’s 230,000 small business may never reopen, the New York Post reported last week, citing data from The Partnership for New York City, which released a post-pandemic response plan with the insight of 12 global consulting firms.

“We hope to continue with the legacy online and come back one day,” Patel said on Tuesday.