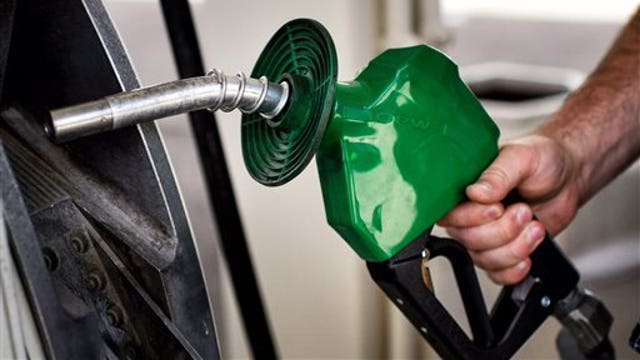 Cheap gas good or bad for the economy?

Oil fell on Monday as weaker-than-expected Chinese economic data weighed on markets, adding to concerns that declining global demand would exacerbate a surplus of crude.

Markets are also waiting to see whether the U.S. central bank raises interest rates for the first time in nearly a decade later this week. Should rates rise, analysts expect oil to fall, as a stronger dollar would undermine demand from importing countries.

Oil prices have dropped almost 60 percent since June 2014 on the largest global surplus in modern times and concerns about a slowing Chinese economy.

Growth in China's investment and factory output missed forecasts in August. A recent run of weak data from the world's second-largest economy has raised the chances that third-quarter growth may dip below 7 percent for the first time since the financial crisis.

"There has been a very broad-based reaction to China across commodities, industrial metals and equities," SEB chief commodities analyst Bjarne Schieldrop said.

$2 Gas by Christmas?
Economy not strong enough to support demand growth for oil?

Barclays expects the spread between U.S. crude and Brent, which is at its narrowest in three months, to contract further, noting "relative performance versus Brent continues to improve."

The Organization of the Petroleum Exporting Countries on Monday lowered its non-OPEC oil supply growth forecast, sticking to its view that its strategy of letting prices fall will curb supply from the United States and other rival producers.

The International Energy Agency said last week that production cuts would lead to a rebalancing of the oil market by next year.

A fall in U.S. production in response to lower prices could provide price support, analysts say.

"We think we are near the floor, but nothing precludes that we temporarily move lower," BNP Paribas global head of commodity strategy Harry Tchilinguirian told the Reuters Global Oil Forum.

Morgan Stanley said: "Both the supply and demand pictures look less favorable over the coming months ... Outside the U.S., oil fundamentals appear to be slipping seasonally." (Additional reporting by Henning Gloystein in Singapore; Editing by Dale Hudson and William Hardy)