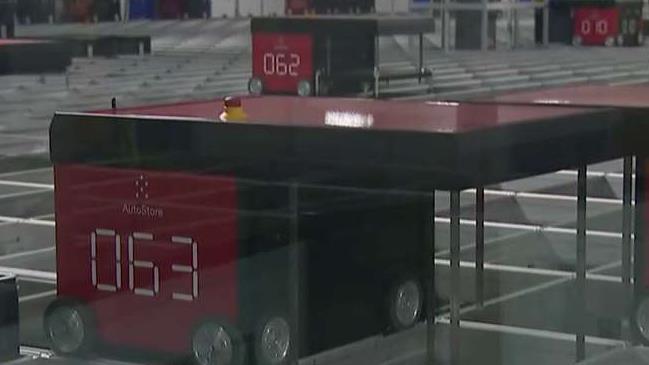 FBN’s Tracee Carrasco is live from a Best Buy warehouse where robots are helping to fulfill orders for Cyber Monday.

The consumer is King in America today. All hail the King.

You can forget about all that recession pessimism, American's incomes are bulging and this Thanksgiving weekend we saw first-hand what prosperity looks like.

This is all-time record spending and it’s the best frontline indicator that Americans are feeling bullish about their financial situation this year – and next. Cyber Monday and all the enticing sharp discounts are expected to reward online retailers with close to another $10 billion in consumer purchases.

Online spending was the big winner this past weekend as e-commerce surged much faster than store sales.  Foot traffic in stores and mega-malls was down slightly over the weekend, but rumors of the death of shopping malls and mom and pop retail stores appear to be greatly exaggerated.

The National Retail Federation estimates that of the expected $730 billion in expected holiday shopping this year, or about one-quarter of all sales.

Retailers like Target, Walmart and Best Buy are also adjusting their income strategies as they offer online and in-store sales.  To take on Amazon, these major retailers are providing free shipping and are using local store inventories to fill on-line sales orders. Retailers like Kohls and Nordstroms that fail to adjust may be the big losers.

But the real story here is the strength of a high-flying economy now 10 and a half years without a downturn.

When Donald Trump entered office the consensus among economists was that the bull market in stocks and the economic recovery had to come to an end. But I keep searching under my desk, down the hall, and out the window for this recession boogeyman that the media keeps warning about and he’s nowhere in sight.  It’s a recession phantom.

If anything, most sectors of the economy – especially big tech, consumer spending, financial services and construction -- are picking up steam.  Manufacturing is slow and worrisome, but everything else looks like the picture of good health.

The other revelation from the bulky spending behavior is that the middle class isn’t disappearing, it is getting richer.  Median family incomes just hit $66,000 according to Sentier Research, an all-time high and up some $5,250 in real terms since Trump took office.

Lower-income Americans have also seen a bump up in their incomes, and the biggest percentage gains in wages have been going to people in the lowest 20 percent of income.  There is no bigger lie in American politics than the claims by 2020 Democratic presidential candidates Joe Biden, Elizabeth Warren and Bernie Sanders that only the rich are snatching the gains from the Trump economy.

Who are you going to believe, the politicians or the shoppers trampling through the malls to load up on Frozen 2 dolls, flat-screen TVs, videos and golf clubs?

The 50 percent gains in the stock market over the last three years are also putting money in Americans’ retirement accounts.  Not all of the more than $10 trillion increase in wealth is going to Warren Buffet and George Soros.  The income and wealth gains aren’t trickling down, they are pouring down into the laps of working-class Americans like Niagara Falls.

Now that makes for a very Merry Christmas.

Stephen Moore is a senior fellow at the Heritage Foundation.