The February jobs report is due on Friday, and while the headline number of the number of jobs created in the month will likely garner the most attention, there is one number that everyone should pay close attention to: wage inflation.

According to Credit Suisse, wage inflation poses a risk to profits, Fed policy and the business cycle. “In light of the recent acceleration in wage gains, we are updating our Recession Dashboard, taking Inflation Trends from favorable to neutral,” the bank said in a research note. “While not yet problematic, an overheating labor market poses the greatest threat to profit margins and could force the Fed to become more engaged,” the bank added.

In January, wages increased by a much larger-than-expected 2.9%, and this sparked worries about inflation and rising interest rates, triggering a stock market sell-off that pushed the Dow Jones Industrial Average and the S&P 500 into correction territory on Feb. 8.

With the red hot jobs market, employers may have to increase wages to retain and attract talent, and the recent increase in wages suggests that this is already occurring. 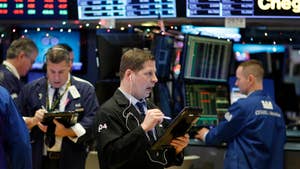 US stocks higher, aim to shake-off concerns about tariffs

According to the National Conference of State Legislatures, 18 states announced they would begin 2018 with higher wages due to the higher cost of living, including Alaska, Florida, Minnesota, Missouri, Montana, New Jersey, Ohio and South Dakota. Arizona, California, Colorado, Hawaii, Maine, Michigan, New York, Rhode Island, Vermont and Washington increased their minimum wages due to previously approved legislation or ballot initiatives.

While wage pressures are increasing, they shouldn’t spark a recession anytime soon. “While wage inflation has picked up, other indicators point to limited recessionary risk. As a result, we remain comfortable with our S&P 500 target of 3000, and a healthy continuation of the business cycle,” said Credit Suisse.

For the February jobs report, analysts polled by Thomson Reuters expect wage growth to cool a little bit, to 2.8% year-over-year. They forecast that the U.S. economy added 200,000 nonfarm jobs in the month while the unemployment rate should fall to 4%, the lowest reading since December 2000.