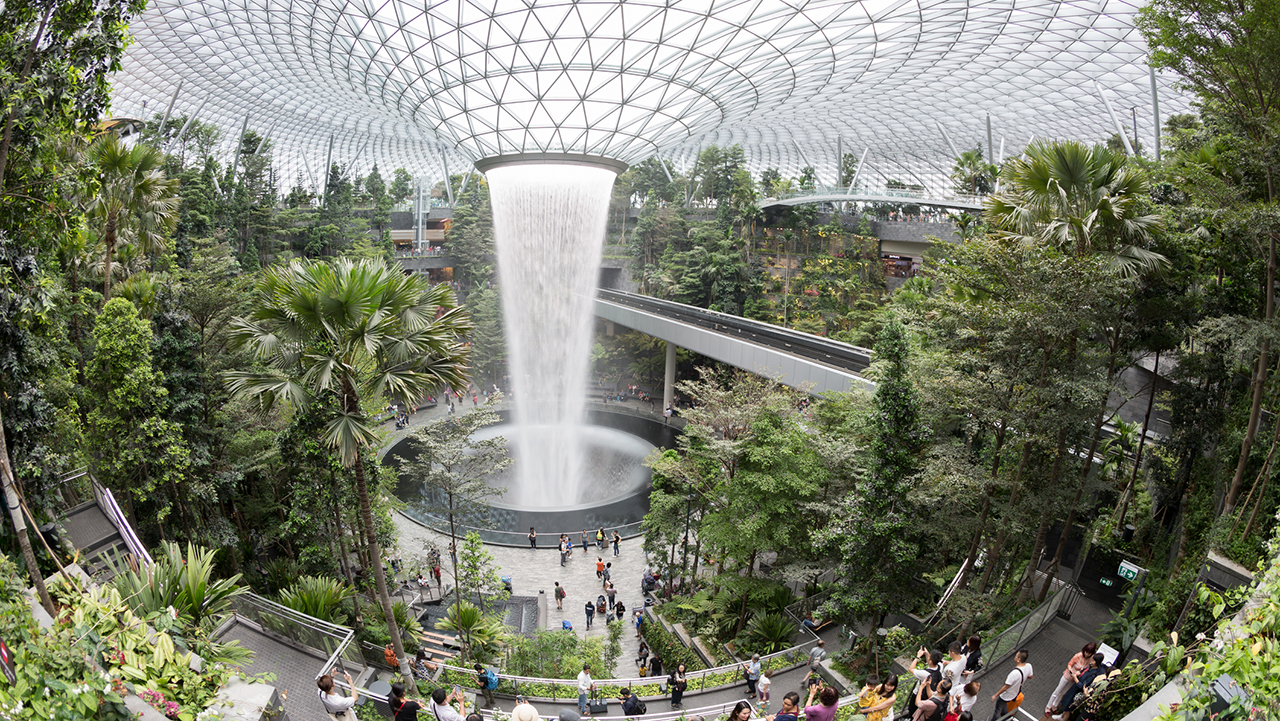 Singapore’s Changi Airport, which has been awarded the title of world’s best” airport for the last eight years, has a “daunting” forecast for the future of air transit.

The Changi Airport Group (CAG) recently released a fiscal report covering April 2019 through March 2020, which showed shareholder profits were down 36% from the previous fiscal year despite total revenue rising 2.6%.

The increase in revenue, however, was largely attributable to the opening of the Jewel, a mixed-use shopping and entertainment complex, in April 2019. And any benefit from the opening of the Jewel, or the increased traffic during the first 10 months of the fiscal year, was “severely negated by the collapse in air travel” during the final two, according to the group’s report.

Passengers and visitors at the Jewel Changi Airport shortly after the opening of the mixed-use retail and entertainment facility.  (iStock)

“The battle with Covid-19 has only just begun with travel recovery highly dependent on how countries around the world manage border controls, the relaxation of air travel requirements and the development of viable medical treatments for the virus,” wrote CAG Chairman Liew Mun Leong and CEO Lee Seow Hiang in a joint statement.

“The future does appear daunting with the situation showing no signs of abatement.”

LOOK: SINGAPORE'S CHANGI AIRPORT HAS A SLIDE THAT TAKES YOU TO YOUR GATE

Singapore had originally banned travelers from China in February after news of an outbreak of the novel coronavirus in Wuhan. In the following weeks, Singapore’s government instituted stricter limitations on travel from a number of countries and asked residents to refrain from going abroad before its borders were ultimately closed to all short-term travelers as of March 23.

In April, the retail stores at the Jewel were largely shuttered after Singapore required the closure of nonessential businesses, the report added. Two terminals were also closed as a result of fewer passengers, with plans for another (T5)  being put on hold indefinitely.

As a result of reduced travel, Singapore's Changi Airport temporarily closed two terminals (T2 and T4) and halted work on a new one. (iStock)

Changi’s operations focused mostly on cargo flights afterward as well as the repatriation of Singaporean citizens who were overseas when the coronavirus crisis was deemed a global pandemic.

Despite the current “havoc in the world of aviation,” Changi Airport Group is confident it can see the airport through these “darkest” times, according to the report.

Changi Airport, meanwhile, had been awarded the title of world’s best airport at SkyTrax’s World Airport Awards for the last eight years in a row, with the CEO of SkyTrax remarking in May that the facility “delights at nearly all points” of the journey.