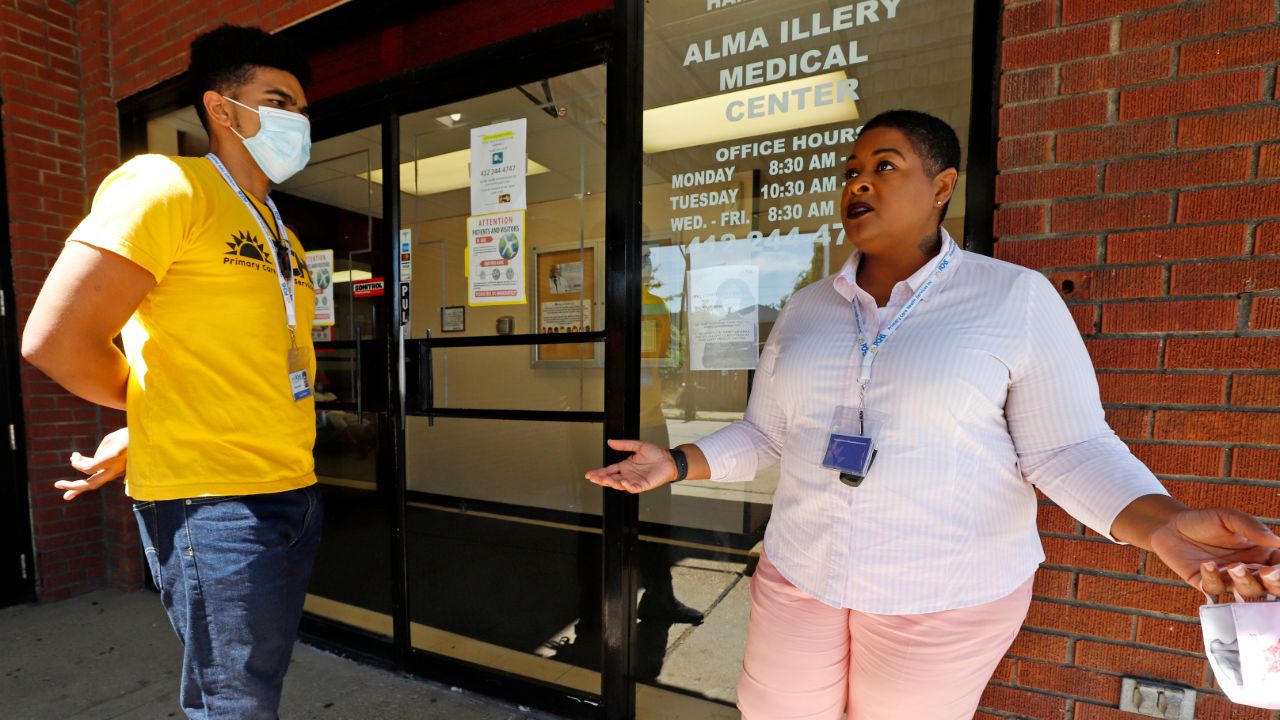 By his estimation, Stephen Santa took Pennsylvania's coronavirus lockdown seriously: He pretty much went only to grocery stores and picked up takeout once a week to help Pittsburgh's restaurants.

Whatever Santa and everyone else in Pittsburgh did, it seemed to work: The city racked up a fraction of the coronavirus cases during the spring shutdown, while the other side of Pennsylvania flared up into a hot spot.

Kiva A. Fisher-Green, center, watches as nurse Ruth John, right, takes a sample from Walter Lewis for a COVID-19 test in the driveway of the Alma Illery Medical Center in the Homewood neighborhood of Pittsburgh. (AP Photo/Gene J. Puskar)

With a state-mandated masking order in place, Pittsburgh's gyms, salons, bars and restaurants got permission to reopen in early June, ahead of many parts of Pennsylvania, as part of the so-called “green” phase in Gov. Tom Wolf's three-step stoplight-colored reopening plan.

Santa promptly went to a nearby Italian restaurant for a meal in its outdoor courtyard with a couple relatives.

When they got there, around 5 p.m. on a Tuesday, it was practically empty. When they left, it was packed inside: every table full, no masks and nobody keeping 3 feet apart, never mind 6 feet apart.

“I think partly a lot of people saw the word ‘green’ and it meant ‘go’ and 'we're going back how things were,'" Santa said.

Barely three weeks later, officials in Allegheny County — home to Pittsburgh and 1.2 million residents — raised the alarm over a spike in COVID-19 cases.

The culprit? Primarily, people in their 20s, 30s and 40s who told contact tracers that they had been visiting bars and restaurants or working in them, county officials said.

Thus began a cascade of orders in July shutting down bars and restaurants, or curtailing dine-in service, as Allegheny County battled to keep its outbreak from becoming a full-blown surge like those across southern and western states.

Larisa Mednis, left, talks with Amelia Benson about working in the same Pittsburgh restaurant during the COVID-19 pandemic while sitting in a park in Pittsburgh. (AP Photo/Keith Srakocic)

State health officials even blocked an agreement between the Toronto Blue Jays and the Pittsburgh Pirates to let the Canadian baseball team play at PNC Park in Pittsburgh during the pandemic, pointing to the area's increase in infections.

Pittsburgh's story may be inevitable for every part of the United States.

It also may be self-inflicted by the people who live there.

Dr. Donald S. Burke, a professor of epidemiology and dean emeritus at the University of Pittsburgh’s Graduate School of Public Health, said a preliminary review of Google mobility data shows no spike in people visiting businesses in June.

That is consistent, he said, with an outbreak that is fueled by a narrow demographic: for instance, younger people going to bars and restaurants.

Pittsburgh could be considered in a second tier of hot-spot cities, like those in southern and western states: less densely packed than New York and Philadelphia, but still fertile ground for the virus after reopening, Burke said.

SMITHFIELD FOODS SAYS NOT ALL PLANT WORKERS CAN BE SOCIALLY DISTANCED

So far, coronavirus-related deaths in Allegheny County are stable, slightly above June’s pace, and hospitalizations, despite tripling from mid-June, are not yet eliciting concern from county or state officials.

When Allegheny County's bars and restaurants reopened in June, many staff members were concerned over safety at the upscale Asian fusion restaurant in Pittsburgh’s East End where Amelia Benson was working.

They pushed for, and got, an all-staff meeting to discuss safety protocol.

They were each issued several black cotton masks and told those were to be part of the restaurant uniform. Customers were to wear masks indoors unless sitting at their table, managers told them.

But enforcement of mask-wearing among employees was lax when customers were out of sight.

“Everyone would show up in a masks and then immediately take it off because it was too hard to be heard yelling orders,” Benson said.

On June 30, Benson got an email that an employee had tested positive — six days after taking a test.

Like Benson, Larisa Mednis worked the same last shift as the employee who tested positive.

It was jarring, she said, “because people who had worked that day, we weren’t told who it was, so we didn’t know how close contact we had had, how much it could have spread through the building when we were there. There was a lot unknown at that moment.”

Benson and Mednis both tested negative.

Larisa Mednis talks about working in a Pittsburgh restaurant during the COVID-19 pandemic while sitting in a park near her home in Pittsburgh. (AP Photo/Keith Srakocic)

It was difficult policing customers, too. Some would wear a mask in, sit down, take it off and then get up to socialize with people at other tables.

One night, a group of three walked in, maskless. Told they needed to wear masks, they responded that they all had breathing problems and were exempt from the state order for health reasons, Mednis said.

“I don’t want to say they weren’t telling the truth, but it felt they were attacking us or trying to pick a fight,” Mednis said.

Susan Williams, who with her sister runs Take a Break Bar, which draws restaurant and bar workers from the nearby strip in Pittsburgh’s Lawrenceville neighborhood, found it thorny to enforce a mask order.

When customers walked in without masks, they let it go, uncertain who was exempt because of disability laws and feeling barred from asking because of health care privacy laws.

“It’s not our right to ask them that,” Williams said.

After Santa got home from his meal out, he decided he'd raise the matter with the restaurant's management. The manager on the phone was dismissive — he asked if Santa had brought a tape measure to check the distance between tables — so Santa emailed the owner.

The owner offered to pay for Santa's meal that night, as well takeout meals Santa got there during the shutdown, and then told him: “Please do not step foot in my restaurant ever again.”