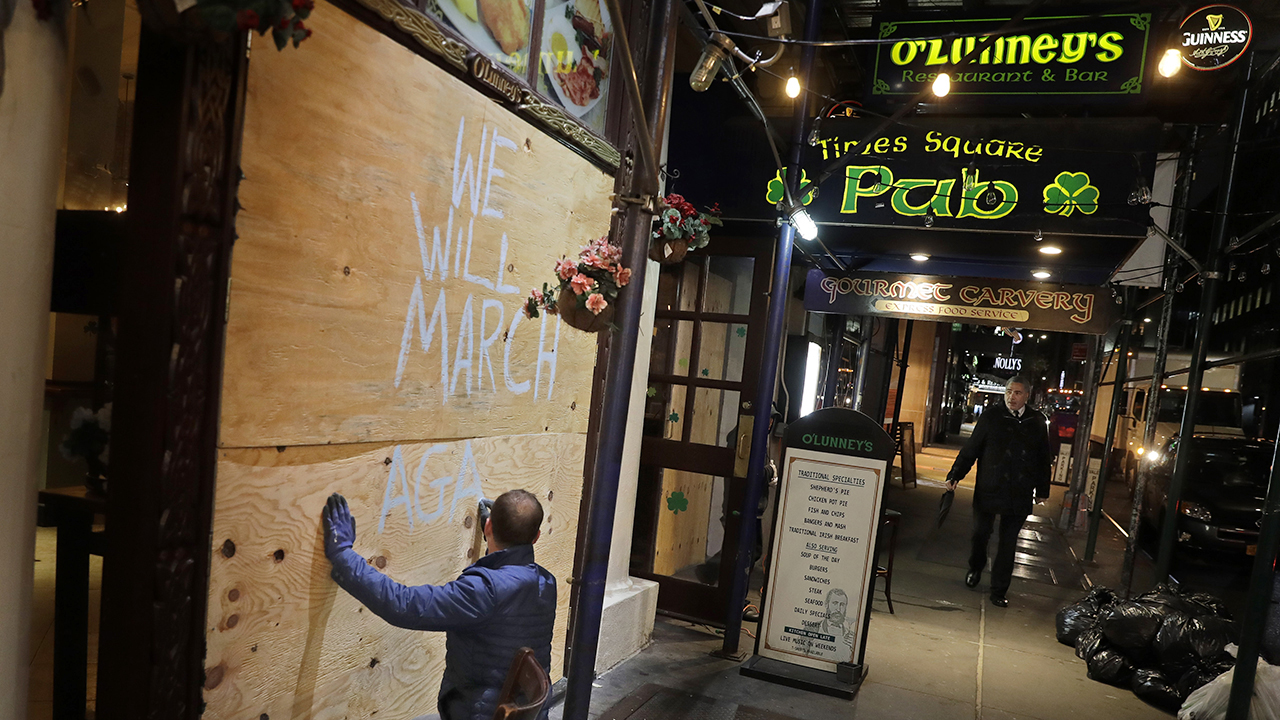 Burglaries of businesses have risen in New York City under emergency measures to fight the new coronavirus, according to new New York Police Department data, and some businesses are boarding up their storefronts.

The NYPD has seen a 75% increase in reports of burglaries of commercial establishments from March 12, when New York City Mayor Bill de Blasio declared a state of emergency, to March 31, police officials said. The NYPD recorded 254 burglaries of businesses during that time period this year compared with 145 for the same period last year, the officials said.

Dolce & Gabbana on Mercer Street has boarded up windows and entrances to prevent looting in Manhattan. (Photo by Lev Radin/Pacific Press/LightRocket via Getty Images)

All boroughs of the city have seen increases, the officials said.

The increase in burglaries coincided with steps to stop the spread of the coronavirus. On March 15, the city ordered restaurants and bars to cease on-site service, prompting many establishments to close altogether or limit operations. A March 20 decree by Gov. Andrew Cuomo called for the closure of all nonessential businesses, leading many retail stores to shutter.

"We knew with the closing of many stores that we could see an increase and, unfortunately, we are," said NYPD Chief of Crime Control Strategies Michael LiPetri.

The increase in commercial burglaries comes as major crimes across the city fell during the pandemic. From March 12 through March 31, major felonies, such as rapes, murders and assaults, fell by nearly 20% when compared with the same period in 2019, dropping to 3,740 such crimes from 4,670 a year earlier.

But Mr. LiPetri said that break-ins of eateries, supermarkets and retail establishments are fueling a rise in commercial burglaries. There were 30 burglaries of supermarkets and bodegas between March 12 and March 31, according to NYPD data, a 400% increase from six such incidents recorded during the same period a year earlier. Burglaries of eateries nearly doubled, rising to 51 incidents in 2020 from 28 incidents in 2019.

POLICING AMID CORONAVIRUS PANDEMIC: HOW THESE BIG CITIES ARE RESPONDING

Thieves are taking currency, electronics and consumables, such as food, alcohol and retail goods from businesses, Mr. LiPetri said. They gain entry to closed businesses by forcing open doors, breaking windows or climbing in from rooftops, he said.

NYPD patrols are mobilized against the thefts, Mr. LePetri said. Police are working with business owners to deploy additional resources where needed and are reassessing patrols in real time, according to NYPD officials. On March 31, police apprehended three suspects charged in a string of burglaries in Queens and Brooklyn.

As burglaries have increased, a handful of chain retailers have boarded up New York City shops, including the cosmetics retailer Sephora, which has covered the windows of stores at locations in Times Square and on West 34th Street in Manhattan.

In a statement, Sephora representatives said the company has closed North American locations to adapt to the coronavirus and adopted standardized precautions for its properties. "Our goal is to ensure a great experience for our clients when we have the opportunity to reopen, " the company said.

Police officials said that few New York City businesses have boarded up their storefronts. But leaders of local business-improvement districts worry that the strategy could invite graffiti and potentially prompt other shop owners to do the same. Some districts said they haven't seen any large increases or break-ins of storefronts.

Dan Biederman, president of the 34th Street Partnership, a business-improvement district that includes the closed Sephora location, said it isn't necessary for businesses to board up their windows. "It's a solution in search of a problem," Mr. Biederman said.

A view of a Dior Boutique in Soho area boarded shut amid the coronavirus (COVID-19) outbreak on March 26, 2020, in New York City (Photo by John Nacion/NurPhoto via Getty Images)

Residents who noticed vandalism of the storefront run by the high-end retailer of lotions, fragrances and skin-care products called to complain, Mr. Caserta said. Representatives for Aesop didn't respond to calls for comment.

Mr. Caserta said boarding up buildings sends an inappropriate message to the community.

"It brings up this idea of rioting and collapse of society," Mr. Caserta said. "This is way too much, and it sends the wrong signal."