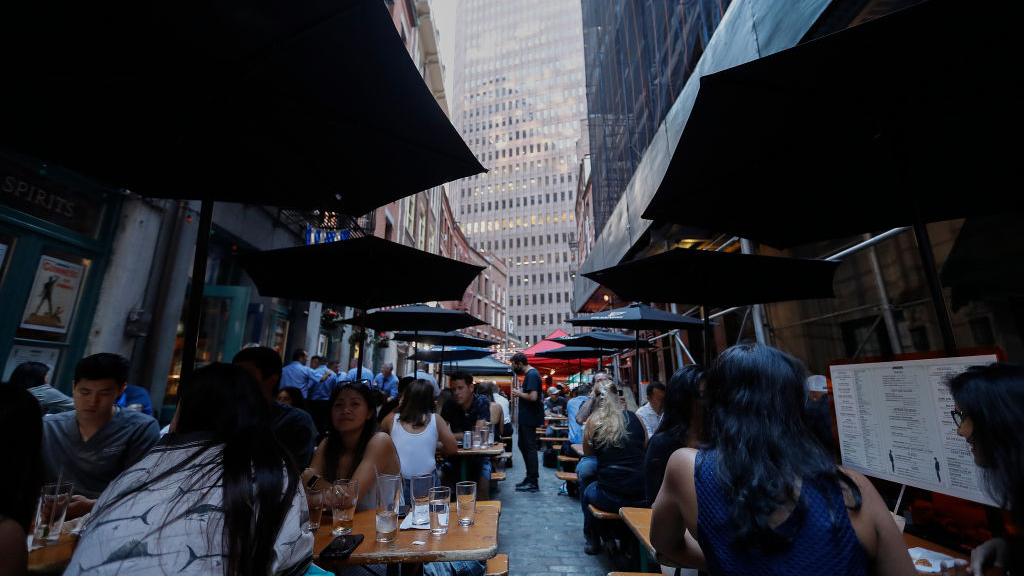 Eighty-seven percent of bars, restaurants, nightclubs and event spaces in the five boroughs could not pay their full August rent, according to data from 457 businesses surveyed between Aug. 25 and Sept. 11, in a new study released Monday by the nonprofit NYC Hospitality Alliance.

A survey conducted by the NYC Hospitality Alliance found that 87% of the city's bars and eateries couldn't pay their August rent in full — a four-point jump from July. (John Lamparski/Getty Images)

It’s a 7 percentage-point increase from June and a 4-point jump from July, darkening the dire picture for eateries desperately seeking relief following six months of partial – and in some cases total – closure due to COVID-19 shutdowns.

Some 34% of this group said they could not pay rent at all last month, and only 12.9% were able to meet full payments.

POPCORN FARMERS SITTING ON MOUNTAINS OF UNSOLD KERNELS AS A RESULT OF MOVIE THEATER CLOSURES: REPORT

“Even before the pandemic when operating at 100% occupancy, these small businesses were struggling to stay open. Now we’re seeing widespread closures, approximately 150,000 industry workers are still out of their jobs, and the overwhelming majority of these remaining small businesses cannot afford to pay rent.

“The hospitality industry is essential to New York’s economic and social fabric, and to ensure the survival of these vital small businesses and jobs, we urgently need rent relief, an indefinite extension of outdoor dining, a roadmap for expanded indoor dining, covered business interruption insurance and immediate passage of the Restaurants Act by Congress,” he added.

Meanwhile, 90% reported they have been trying to negotiate their leases, but their landlords wouldn’t budge.

The study also comes ahead of the long-awaited partial reopening of New York City’s indoor dining slated for Sept. 30 at 25% capacity.

New York City will be the last region in the state – and also a month behind neighboring New Jersey – to get the green light for the practice, despite a majority of the Empire State’s 57 counties outside the five boroughs being approved for the practice since June.

Demonstrators are seen during a protest supporting an increase to indoor-dining capacity in NYC. (Michael Nagle/Bloomberg via Getty Images)

“I’m not really surprised because the industry is devastated by this pandemic,” said David Rosen, owner of several eateries, including Williamsburg’s the Breakers. He is also co-founder of the Brooklyn Allied Bars and Restaurants and a member of the New York City Nightlife Advisory Board.

“The analysis around why folks are not able to get firm relief from their landlord, or renegotiate around long-term lease agreements or changes, is interesting because the narrative for the past few months has generally trended in a positive direction,” said Rosen.

“I can understand why landlords have been reticent to renegotiate because people have been under the impression that we would reopen or get back to normal,” he added, saying he, too, is in different stages of ongoing discussions with his landlords and doesn’t expect to fully reopen his venues until at least next spring.

“What’s concerning about this report is I would assume given the past two months and with outdoor dining, unfortunately, will be peak revenue season during this pandemic for restaurants. As we head into the winter, even with indoor dining on the horizon, I don’t think that 25% indoor will exceed what exists already outside. This ‘inability to pay rent’ trend will continue, if not worsen,” he said.

The state has yet to set what comes after Sept. 30, and whether the 25% limit will be increased depending on positive compliance and infection data.

The Empire State has also recorded several months’ worth of less than a 1% positive COVID-19 infection rate statewide.