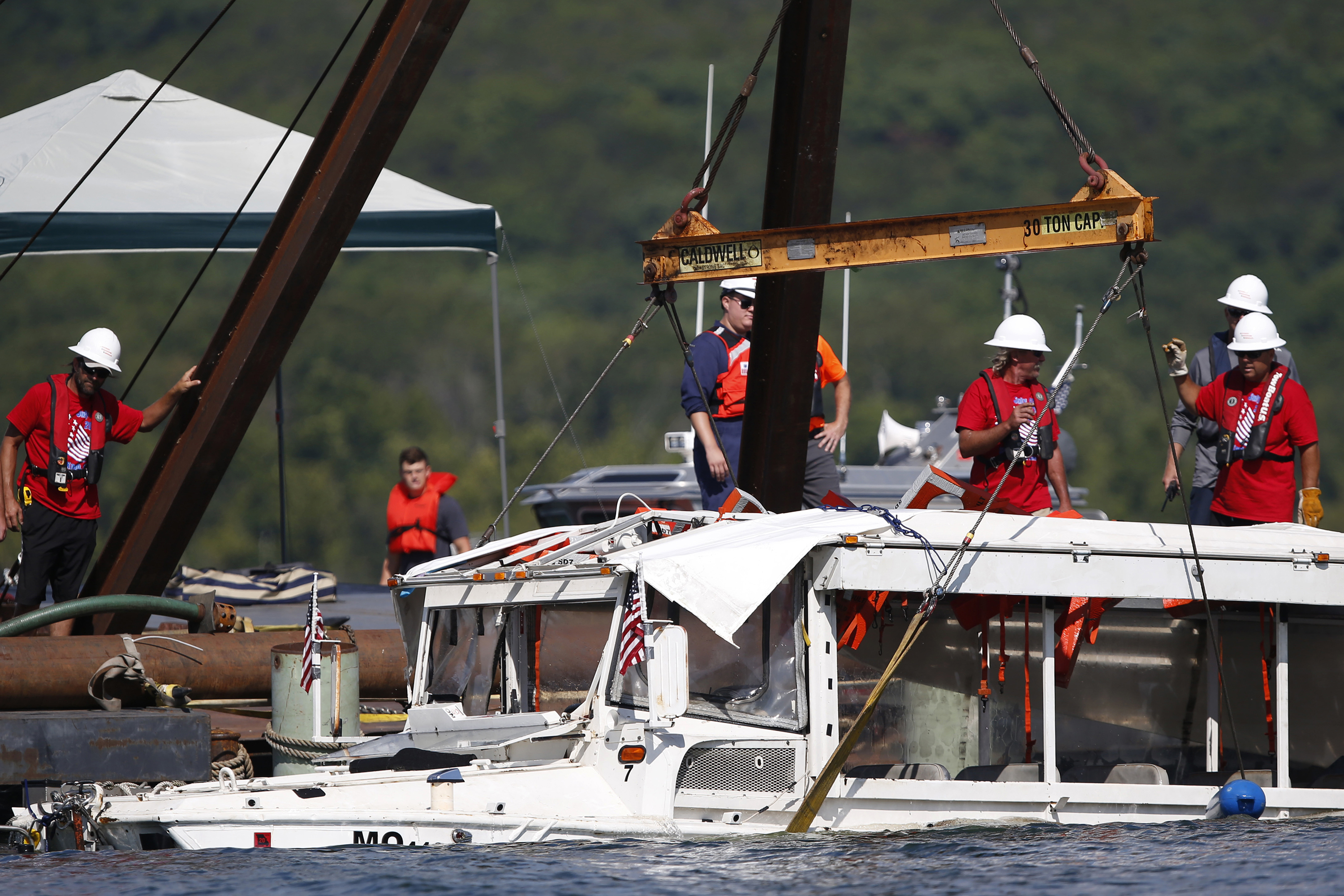 LIBERTY, Mo. (AP) — The U.S. Coast Guard agrees that canopies and side curtains should be removed from amphibious tour vehicles known as stretch duck boats, according to documents released Tuesday following an investigation into a deadly accident two summers ago on a Missouri lake.

The National Transportation Safety Board released the findings of its investigation into the July 2018 tragedy, when a Ride the Ducks vehicle sank during a severe and sudden storm on Table Rock Lake near Branson, killing 17 of the 31 people on board.

Included among the documents released by the NTSB was a letter dated April 15 in which Daniel Abel, vice admiral of the Coast Guard, said the Guard agreed with an NTSB recommendation to modify vehicles like the one that sank in Missouri.

"The removal of canopies, side curtains, and associated framing from the DUKW fleet would improve emergency egress," the report stated. The Coast Guard said it would issue a Marine Safety Information Bulletin, the first step in the process.

During a virtual meeting Tuesday, the NTSB repeated criticism of the Coast Guard that it issued in November, saying the agency had ignored its recommendations to improve the boats since a duck boat accident in Arkansas killed 13 people in 1999. The board said it has repeatedly urged the Coast Guard to require that the boats be upgraded to stay afloat when flooded, and to remove barriers to escape, such as canopies.

The boat's owner, Ripley Entertainment, has settled 31 lawsuits filed by survivors or relatives of those who died. The dead included nine members of one family from Indianapolis. Other victims were from Missouri, Illinois and Arkansas.

Two Missouri State Highway Patrol investigators interviewed duck boat Capt. Scott McKee the day after the accident. McKee said radar indicated the storm was "quite a ways away," so he took the boat into the water, but it quickly turned from calm to turbulent.

The duck boat that sank in Table Rock Lake in Branson, Mo., is raised after it went down the evening of July 19 on July 23, 2018. (Nathan Papes/The Springfield News-Leader via AP, File)

"I never expected it to get this rough," McKee said. "Never had any — I've never seen it get that rough."

McKee said he didn't have time to tell passengers to don life jackets. He found himself in the water, struggling to survive, and someone saved him by pulling him onto the Branson Belle, another tourist boat.

NTSB members said they hadn't been able to interview McKee because of ongoing criminal investigations. McKee, of Verona, is charged with 17 counts of misconduct, negligence or inattention to duty. Two Ripley executives are also charged with misconduct and neglect.

The NTSB acknowledged in its report that more duck boat passengers would have died if they had been wearing life jackets, because the flotation devices would have forced passengers upward and trapped them against the canopy, when they needed to swim downward to get into the water. They acknowledged that conflicts with general guidance to always wear life jackets on boats.

According to the NTSB report, the weather service had issued severe storm warnings with sufficient time to stop the boat, known as Stretch Duck 7, from going in the water. Investigators couldn't determine if McKee saw an email warning about the upcoming storm before going into the water.

Witnesses on the Branson Belle recalled the harrowing moments as the duck boat sank, with people suddenly swimming for their lives.

Deckhand Elijah Romero said he could see the waves overwhelming the boat.

"And as soon as the windows in the back of the boat dropped below the water line on the stern, the whole thing went down in 10 seconds, it was gone," Romero told investigators. "The whole thing was under water, and we could see people floating in the water."

The refurbished amphibious duck boats were a major tourist attraction in Branson for nearly 50 years, and Ripley purchased the attraction in 2017. The boats started out on land and then entered the water for a brief tour around the lake. Ripley suspended operations of the boats after the accident and it remains unclear if they will ever return to the lake.