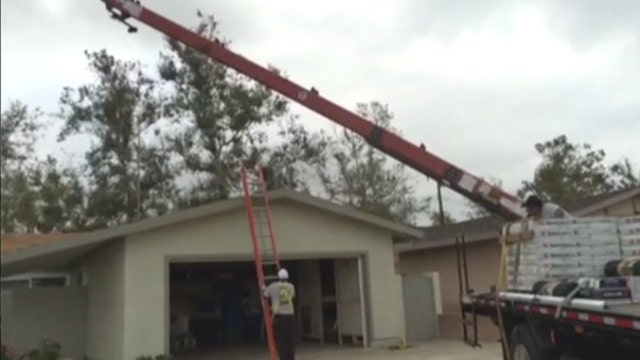 Small business gets back to its roots of family and community

Meet Brian Torry from Phoenix, Ariz. Torry is the president and CEO of Elite Roofing Supply, LLC. Founded a little over a year ago, the company just opened a third location in Corona, Calif.

Brian moved to Phoenix, Ariz., from Louisiana when he was 20-years-old. His education consisted of a high school diploma and a lifetime of hunting and fishing. He said it was a background that made him highly-qualified for not knowing what he wanted to do with himself. After six months, his parents recommended he file for unemployment.

So he stood in the unemployment line waiting to file when someone with Southwest Roofing Supply walked up looking for someone to answer their phones. Brian started work that day -- and said that’s where his real education began.

“I completely stumbled into it, it just happened to be,” Torry said. “It could just as easily been selling cars.”

But it just stuck -- like tar to a roof. He worked hard to climb up the employment ladder until he found himself in a management position. Impressed by his skills and work-ethic, two of his mentors, Ron Pugh and Rodney Burns, offered him ownership in Roofing Supply Inc. in exchange for opening stores in Arizona and California.

Their business plan was: offer minority ownership to bright, motivated young people already established in the roofing distribution business, and give them the financing and mentorship to succeed. Torry accepted their offer and thrived under their tutelage, opening 11 locations under them.

When Pugh and Burns sold their business to a private equity firm in 2006, Torry stayed with the company but didn’t enjoy his work. He missed the entrepreneurial spirit of a small business and felt out-of-touch with the community. So when his contract was up, he left.

“Once you get to a level of success you become a prime target of acquisition by competitors,” Torry said. “While I understand where it’s coming from, I don’t like it. It’s unhealthy for the roofing industry because it does drive up the pricing and eliminates the entrepreneurial spirit.”

By this time, Torry had been in the roofing business for more than 30 years. He heard retirement calling his name, but didn’t like the sound.

“I played a lot of golf and fished, and hunted and read and all of those things for two years. But I came to the realization that I wasn’t ready for that,” Torry said. “I enjoy the stimulation of business, people and personal relationships that you build over the years.”

So he called up a couple of his roofing industry buddies, Scott DeLine and Greg Russell, and together they assembled a seasoned team of pros, with more than 70-years of experience between them, to open Elite Roofing Supply. He also called his daughter Sarah Weiss, who today is a partner.

“To start up a new business at the age of 55, it may have been viewed by some as a foolish gesture,” Torry said. “But it’s what I enjoyed doing.”

In January of 2013 they hit the ground running opening their first two locations in San Jose and Orange, Calif. They used the same business model of manager-owned distributorship that utilized local distribution experts to keep decision-making and power in the local communities it services.

Torry said they service multiple states and work with several hundred contractors. They sell any type of roofing material that can be utilized by a contractor and offer the highest level of service.

“If someone wants to pick up roofing materials at 12 o’clock at night at their office, we will make arrangements to make that happen,” Torry said. “That’s the kind of service we provide people.”

Only a few months after celebrating the company's first birthday, they opened their third location in Corona, Calif. this June. Torry said that while it’s always more about quality than quantity, he would like to open one new location each year. Regardless of how big their business gets, he said he’ll always run his business with the golden rule.

“Treat other people as you would wish to be treated. Treat people with respect. We all get up every morning and work hard and have families,” Torry said. “And the really good ones -- the good quality people, that’s who you want to surround yourself with.”