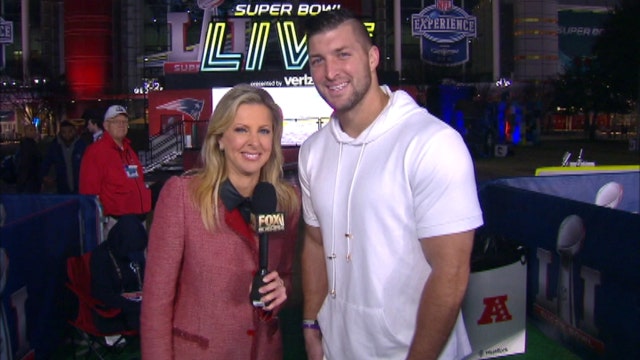 Former quarterback Tim Tebow on what he likes to eat on Super Bowl Sunday.

Former college football star Tim Tebow turned down another shot at a professional football contract in order to continue his bid to make a Major League Baseball roster as a member of the New York Mets.

Steve Spurrier, the college coaching legend and current head coach of the Alliance of American Football’s Orlando Apollos, told “Pro Football Talk” this week that he asked Tebow to join his team in the offseason. Tebow, however, declined the offer.

“I don’t blame Tim,” Spurrier said. “Tim’s got a chance to go to Major League Baseball. I think Tim’s probably headed in the baseball direction. I don’t blame him. If I were in his situation I’d probably do the same thing.”

Tebow, 31, is one of the most decorated athletes in college football history, winning the 2007 Heisman Trophy and two national championships as quarterback of the Florida Gators. The Denver Broncos used a first-round pick to select Tebow in the 2010 NFL Draft, but Tebow failed to catch on in the pros and hasn’t played a regular-season down since 2012.

Tebow signed with the Mets for a deal that included a $100,000 bonus in 2017 and has spent the last two years in the team’s minor league system. He is expected to start the 2019 season in AAA.

If Tebow had signed with the Apollos, he would have received a three-year, non-guaranteed contract worth $250,000 – the same as all of the league’s players. He also would have had the right to leave the AAF to sign with an NFL team, if any expressed interest.

Instead, the former quarterback will focus on his baseball dream.