The benefit of saving for retirement in a 401(k) is the chance to store away a large sum each year, tax free. Currently, the annual maximum for workers under 50 is $18,500. Workers older than 50, meanwhile, get a catch-up provision, which raises that number to $24,500.

Now, these limits do represent an increase from the previous year, but given these figures, you'd think we'd be seeing some pretty strong numbers as far as 401(k) balances are concerned. New data from Vanguard, however, tells us that the average 401(k) balance among their participants was $103,866 last year. 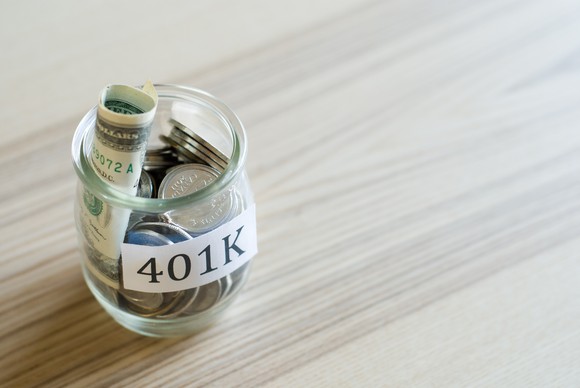 At first glance, that might seem like a decent chunk of savings. But in reality, it's not a whole lot in the grand scheme of what could easily be a 20-year retirement or longer. While the average savings balance in 2017 was $103,866, the median balance was only $26,331, which means a large number of savers have stockpiled far less than the average amount.

Of course, these numbers have a lot more meaning in the context of age. A 29-year-old saver with $103,866 is probably in pretty good shape for retirement, especially if he or she continues to save consistently. A 58-year-old with that sort of balance, on the other hand, is hardly sitting pretty. And if you're somewhere in between, well, you're off to an OK start, but you should also plan on doing better.

You need more savings than you think

Many Americans assume that Social Security will cover the bulk of their retirement expenses -- but it won't. In a best-case scenario, those benefits will replace about 40% of your previous income, but you'll probably need double that amount to live comfortably, which means that in the absence of an employer pension, that money will need to come from you.

Now there's no magic savings number that guarantees you'll manage to cover all of your bills throughout retirement, but as a general rule, if you begin by withdrawing 4% of your savings balance during your first post-work year, and then adjust subsequent withdrawals for inflation, there's a good chance your nest egg will last for 30 years. Therefore, if you're nearing retirement and are looking at a balance of $103,866, that translates into $4,154 of income per year. If you collect what the average Social Security recipient gets today, you'll have roughly another $16,800 to work with. All told, you'll be looking at just under $21,000 a year to pay your living expenses, which clearly isn't enough.

Therefore, if you're in your 50s or 60s and don't have much more saved for retirement than the average person, you'll need to start doing better. That could mean cutting expenses to free up more money for your 401(k), or getting a side job to generate additional income on top of what your regular job pays. Furthermore, you should strongly consider extending your career to not only add to your nest egg, but delay Social Security for as long as possible. For each year you hold off on filing for benefits past your full-retirement age, you'll boost your payments by 8% -- for life.

Will those last-ditch efforts be enough to salvage your retirement? It depends on how well you do, but let's assume you're 60 years old with $103,866, and you manage to max out your 401(k) for the next 10 years. At the current limits, doing so will bring your nest egg value up to about $543,000 if your investments generate an average annual 7% return during that time. If you then withdraw from savings at a rate of 4% per year, you'll be looking at close to $22,000 in annual income from savings, as opposed to just the $4,154 we saw above. And that paints a much nicer picture.

Though $103,866 might seem like a lot of money for retirement, if that's all you end up with, it probably won't cut it. If you're older and are looking at a balance like that, you'll need to start doing better immediately. But that doesn't mean you're off the hook if you're younger. It alwayspays to ramp up your retirement plan contributions and grow the most wealth possible, and if you make the right lifestyle choices, you'll be able to do just that.