No one is officially throwing any flags yet, but the NFL’s announcement Wednesday of a broad partnership with music mogul Shawn “Jay Z” Carter and his firm Roc Nation has several veteran NFL insiders asking questions about potential conflicts of interest.

In a long-term agreement, Roc Nation -- which owns Roc Nation Sports, the player representation agency that counts several football stars as clients -- will oversee production of the NFL’s live entertainment, including the Super Bowl and its halftime show. In addition, Carter’s firm will assist the NFL in production and promotion of new music and participate in efforts to boost the league’s “Inspire Change” social justice platform, which seeks to address issues such as criminal justice reform and improving police-community relations.

At the same time, Roc Nation Sports will service a client list that includes Los Angeles Rams running back Todd Gurley, Pittsburgh Steelers wide receiver JuJu Smith-Schuster and several other players. Depending on perspective, Roc Nation’s business ties to the NFL could be deemed an unfair advantage against other agents or a sign the firm's ability to advocate for players could be compromised. The deal will likely test the NFL Players Association’s rules governing agency behavior, according to Michael Huyghue, a former NFL agent and visiting professor at Cornell Law School in New York.

“I think other agents would immediately say that this gives a false narrative to Roc Nation, that they are in bed with the NFL and because of this cozy relationship with the NFL, any of their players are going to get more favored views,” Huyghue told FOX Business. “Plus, they’re going to have access to all live entertainment that the NFL does, that they’re going to be included in other promotional or marketing things. Even though those things won’t be necessarily true, they give a tremendous advantage.”

The NFLPA declined to comment. Representatives for the NFL and Roc Nation did not return multiple requests for comment. Roc Nation Sports currently represents 21 NFL players, according to the company’s website. 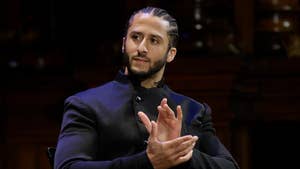 Trump on Kaepernick NFL comeback: 'Only if he's good enough'

Trump’s remarks came days after Kaepernick, who last played in the NFL during the 2016 season, tweeted a video of his workout regimen and said he is “still ready” for a comeback.

Financial terms of the NFL’s deal with Roc Nation were not disclosed. It’s unclear if the NFL contacted the NFLPA before announcing the partnership.

While the potential for a conflict of interest is apparent, it’s “hard to say” how other player agents and union officials will manage the situation, according to Andrew Brandt, a former Green Bay Packers executive and executive vice president at VaynerSports.

“Certainly other agents will point out that this could be a conflict of interest for Roc Nation, while Roc Nation can tell players that they are a differentiated agency not only for having Jay Z but for being the agency chosen for this partnership,” Brandt said. “My sense is it will not have much of an impact on recruiting, but it will be part of the conversation.”

The partnership represented a reversal of sorts for Carter, who emerged as a staunch supporter for former NFL quarterback Colin Kaepernick during his lengthy dispute with the NFL over its handling of social justice issues. Carter was one of several performers who reportedly turned down offers to perform at the Super Bowl halftime show in recent years in solidarity with Kaepernick.

"We forget that Colin's whole thing was to bring attention to social injustice. In that case, this is a success. This is the next phase," Carter said at a press conference Wednesday, according to ESPN. "There [are] two parts of protesting. You go outside and you protest, and then the company or the individual says, 'I hear you.' What do we do next?