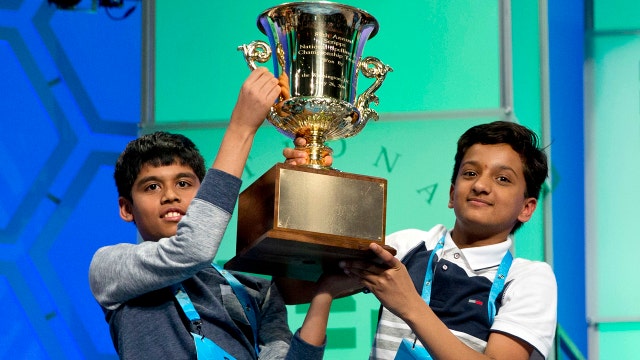 Nicole Petallides talks to the co-champs of the Scripps National Spelling Bee about winning and why they say this is just the beginning.

The two spellers went back and forth in a heart-stopping duel for 22 rounds. In the final round, both boys showed their greatness. Hathwar spelled "Feldenkrais," followed by Janga, who showed no fear when spelling "gesellschaft."

The two boys out-spelled 283 spellers. And at just 11 years old, Janga became the youngest winner in the competition's 91 year history.

Janga, a fifth-grader, hails from Houston, Texas. After nailing the final word, Janga says, he felt great. "I was so excited I was almost speechless."

Janga managed to not only take home the top prize, but also win over social media platforms, impressing his new fans across the country with his knowledge of obscure words and confident attitude.

His fellow winner, Hathwar, showed no signs of fear either. The New York native says he didn't expect to win. "Once it came down to Nihar and me, I thought we were encouraging so that we could possibly do co-champions."

The two winners have big aspirations and say winning the Bee is just the beginning. Much like his fellow champion, Janga is planning to pursue a career in medicine. "I want to be a neurosurgeon and specialize in the brain, and I wanna develop major cures for Alzheimer and Parkinson." Hathwar hasn't picked his specialty yet, but says he hopes to attend Harvard University to study medicine.