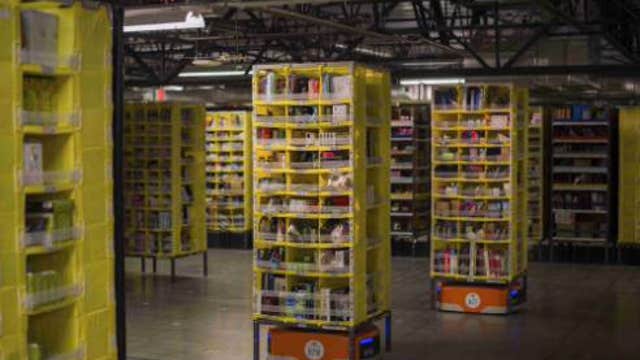 FBN’s Jo Ling Kent with an inside look at Amazon’s fulfillment center in Tracy, California as the company and its robots get orders ready on Cyber Monday.

Amazon.com Inc has installed more than 15,000 robots across 10 U.S. warehouses, a move that promises to cut operating costs by one-fifth and get packages out the door more quickly in the run-up to Christmas.

The orange 320-pound (145 kg) robots, which scoot around the floor on wheels, show how Amazon has adopted technology developed by Kiva Systems, a robotics company it bought for $775 million in 2012. Amazon showcased to media on Sunday ahead of Cyber Monday, the biggest online shopping day of the year.

The robots are designed to help the leading U.S. online retailer speed the time it takes to deliver items to customers and better compete with brick-and-mortar stores, where the bulk of Americans still do their shopping.

The robots also may help Amazon avoid the mishaps of last year's holiday season, when a surge of packages overwhelmed shipping and logistics company UPS and delayed the arrival of Christmas presents around the globe. Amazon offered shipping refunds and $20 gift cards to compensate customers.

Amazon deployed the robots this summer, ahead of the key holiday quarter, when the company typically books about one-third of its annual revenue. The updated warehouses are in five states -- California, Texas, Florida, New Jersey and Washington.

The move comes at a cost. Amazon estimated in June 2013 that it would spend about $46 million to install Kiva robots at its warehouse in Ruskin, Florida, including $26.1 million for the equipment, according to company filings to local government.

At Amazon's warehouse in Tracy, California, workers stack goods in shelves carried by more than 1,500 Kiva robots, which use markings on the floor to navigate and form a "big block of inventory," Clark said.

Squeezing the racks of items closely together eliminates the need for workers to navigate aisles to collect items ordered by consumers. Now, a worker calls for specific items and the robot steers itself to their particular work station. Each robot can carry as much as 720 pounds.

In some cases, the robots have allowed Amazon to get packages out the door in as little as 13 minutes from the pick stations, compared to about an hour and a half on average in older centers.

"It's certainly proving out that it's justified itself," Clark said of the Kiva acquisition. "We're happy with the economics of it."