The chances of a recession taking place within the next year are increasing, according to Bank of America.

Based on the escalating trade war, sluggish economic data and a weakened Federal Reserve arsenal, analysts believe there could be more than a 30 percent chance of a recession by the end of 2020.

“We are worried. We now have a number of early indicators starting to signal heightened risk of recession,” Michelle Meyer, Bank of America’s head of U.S. economics, wrote in a note to clients on Friday. “Our official model has the probability of a recession over the next 12 months only pegged at about 20%, but our subjective call based on the slew of data and events leads us to believe it is closer to a 1-in-3 chance.”

In recent weeks, uncertainty surrounding the U.S.-China trade war, as well as concerns about softening global growth, have dragged down the major U.S. stock indexes. However, stocks jumped higher on Wednesday after the White House delayed the implementation of tariffs on key Chinese imports until Dec. 15.

While job growth remained steady in July, with 164,000 added to the U.S. economy, auto sales, industrial production and aggregate hours worked are near levels consistent with the start of previous recessions.

“As we have consistently noted, expansions do not die of old age, but they can die from a policy mistake,” Meyer said in the note. “And we are ripe for a policy mistake today. The trade war continues to escalate with several rounds of tariffs on Chinese imports and hints of a currency war.”

Plus, the yield curve flashed a deep red last week, when 10-year Treasury note sank to 1.73 percent; at one point, they yielded 33 basis points less than the 3-month bills, marking the most severe yield-curve inversion since the start of the financial recession a decade ago. The spread between the 2- and 10-year note yields, another closely watched gap that predicts recessions, is also narrowing. 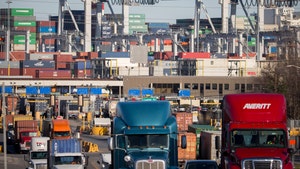 Trump tariffs: How much is US collecting in revenue?

And because interest rates remain historically low — the Federal Reserve cut the benchmark federal funds rate by 25 basis points at its July meeting, lowering the range to between 2 percent and 2.25 percent — the U.S. central bank has less ammo to deal with slowing growth, Meyer warned.

“In the U.S., the Fed has gone from projecting multiple rate hikes late last year to cutting rates in July and guiding towards more easing in coming quarters,” she said. “The question now is: does the Fed have enough ammunition to keep the economy on kilter amid the weakening global backdrop and worsening U.S.-China trade negotiations?”