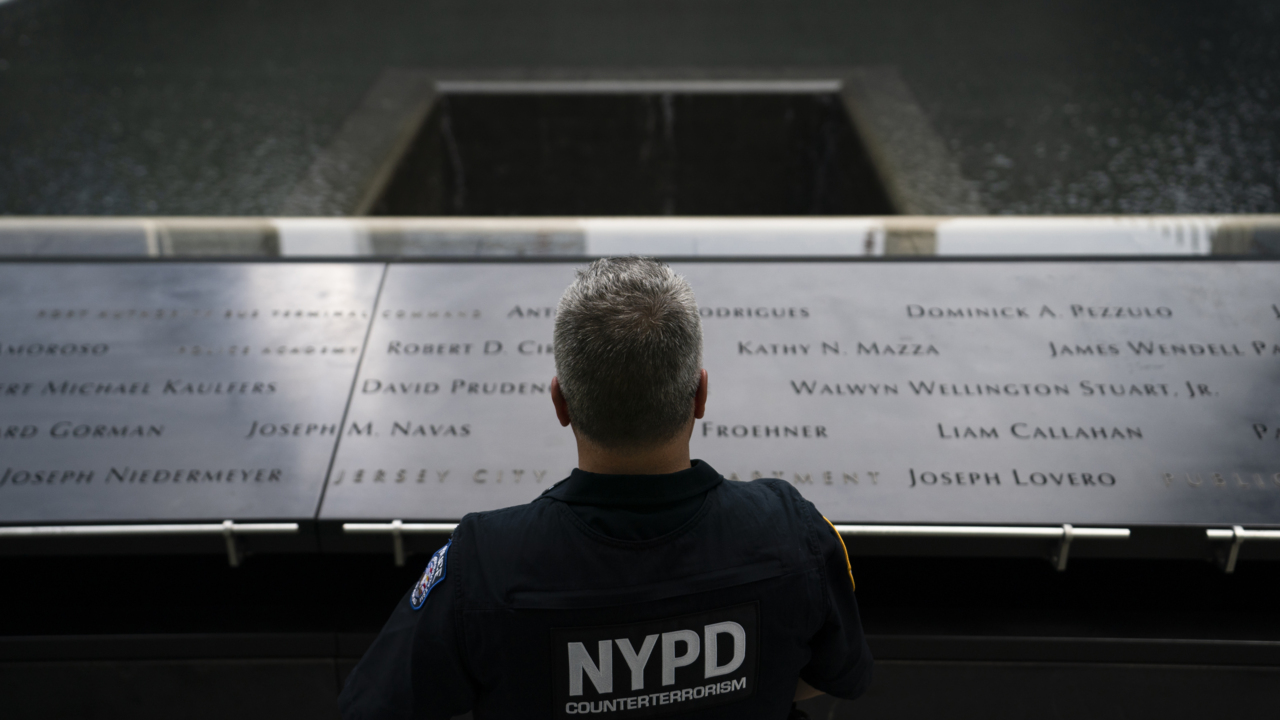 Moment of Silence to commemorate the North Tower falling

Nearly 3,000 people were killed, including men, women and children.

Americans at home watched in terror as two planes, hijacked by terrorists, crashed into the World Trade Center towers, forcing those inside to fall or leap to their deaths.

Completed in 1973 as the tallest buildings in New York City, the North Tower rose to 1,730 feet with a large antenna and the South Tower stood at 1,362 feet high.

Each massive tower weighed more than 250,000 tons and contained 110 stories.

Inside there were 99 elevators, 21,800 windows and each floor was an acre in size.

The North Tower and South Tower provided nearly 10 million square feet of office space for about 35,000 people and 430 companies.

The World Trade Center complex even had its own zip code, 10048, and the Twin Towers were surrounded by five other buildings including a police desk in 5 WTC.

The towers attracted roughly 70,000 tourists and commuters every day.

Before September 11, the Twin Towers were a symbol of the city.

However, when the towers fell, the city fell with them.

Yet, life in the Big Apple could not stop and just hours after the attack, then-Mayor Rudy Giuliani promised to rebuild.

Four months later, newly-appointed Mayor Michael Bloomberg pledged that he would "devote [himself] to building a better New York."

Giuliani encouraged buildings to build low, according to Quartz, and U.S. Model Building and Fire Codes were revised pending an investigation.

According to a NIST (National Institute of Standards and Technology) release, new codes addressed areas including "increasing structural resistance to building collapse from fire and other incidents," "requiring a third exit stairway for tall buildings," "increasing the width of all stairways by 50 percent in new high-rises," "strengthening criteria for the bonding, proper installation and inspection of sprayed fire-resistive materials," "improving the reliability of active fire protection systems," "requiring a new class of robust elevators for access by emergency responders in lieu of an additional stairway" "making exit path markings more prevalent and more visible" and "ensuring effective coverage throughout a building for emergency responder radio communications."

FILE — In this Sept. 12, 2001 file photo, firefighters work in the rubble of the World Trade Center towers in New York. Two decades after the twin towers' collapse, people are still coming forward to report illnesses that might be related to the atta (AP Photo/Virgil Case, File)

In a recent op-ed, The Wall Street Journal's Michael Lewis notes the importance of the 2007 FEMA 'Site and Urban Design for Security: Guidance Against Potential Terrorist Attacks," which promoted a "three layers of defense" strategy akin to those surrounding medieval castles.

He writes that, at the same time, many of the measures advocated by FEMA are invisible to keep the buildings' users from feeling vulnerable.

Security has been woven into urban development – especially in New York.

The Council on Tall Buildings and Urban Habitat reports that 84% of the world's skyscrapers over 200 meters have been built over the past two decades – though most are now outside of the U.S.

The reason, according to many experts in the field, is in improved building science and increased confidence over the past 20 years.

"There is a direct relationship between the developments in building science related to high-rise construction and the perception of improved safety that allowed supertall towers in New York to be commercially viable," Carl Galioto, president of the global design and architecture firm HOK, told Quartz.