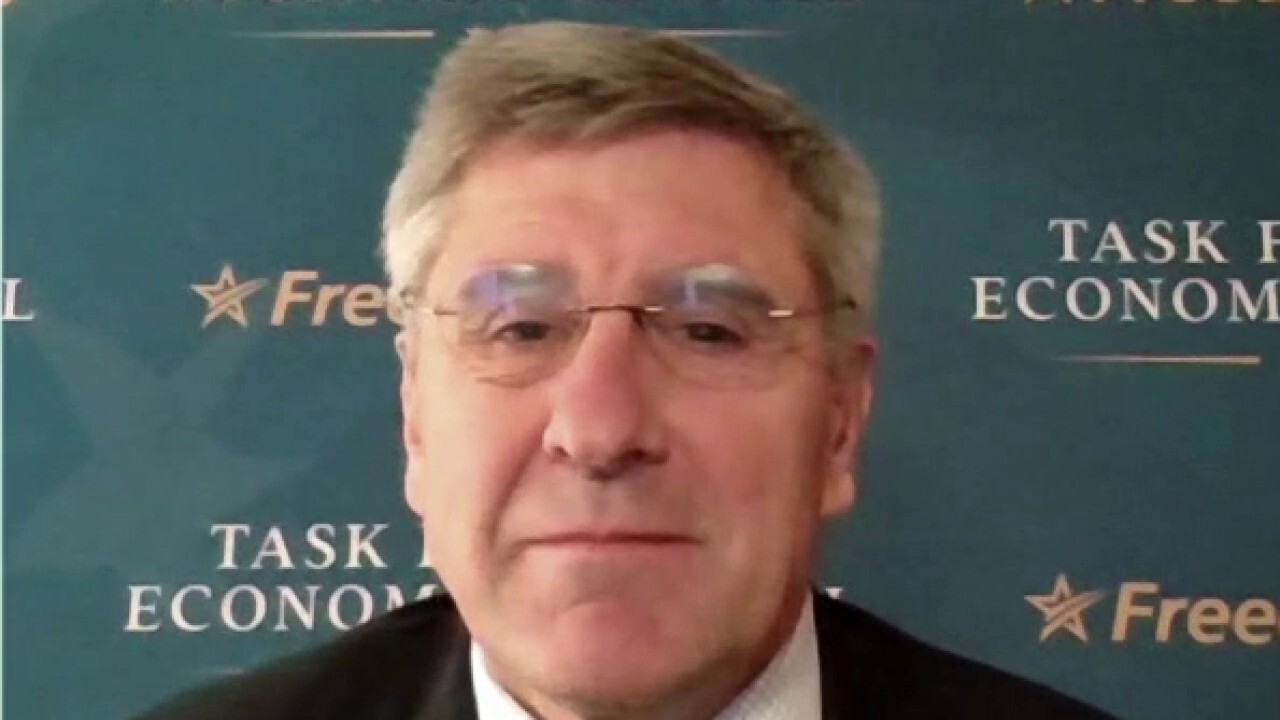 President Trump's economic adviser Stephen Moore argues passing on 'trillions of dollars of debt' to our children is 'not a very nice Christmas present.'

For many who crossed the digital divide this year, there will be no going back.

The Covid-19 pandemic forced millions of Americans to swap the physical for the digital world in a matter of months. As retailers learn to operate without stores, business travelers without airplanes and workers without offices, much of what started out as a temporary expedient is likely to become permanent.

“Covid has acted like a time machine: It brought 2030 to 2020,” said Loren Padelford, vice president at Shopify Inc. “All those trends, where organizations thought they had more time, got rapidly accelerated.”

Merchants using Shopify's e-commerce platform shot up more than 20% between January and June to 1.4 million, according to broker Robert W. Baird & Co.

The reverberations are already apparent in everything from the stock market to corporate spending patterns to the decline of physical cash.

Businesses are now spending less on office space and travel, and more on cloud computing, collaboration software and logistics.

In many ways, digitization is simply the next chapter of a process under way for a century: the dematerialization of the economy. As agriculture gave way to manufacturing and then services, the share of economic value derived from tangible material and muscle shrunk while the share derived from information and brains grew. Former Federal Reserve chairman Alan Greenspan liked to note that economic output has steadily gotten lighter.

The pandemic isn’t the only force at work here. So is the climate-driven imperative to substitute renewable energy for fossil fuels. Solar and wind power require no fuel, storage tanks, pipelines, railcars or tanker ships. The pandemic sped up the shift by depressing prices and investment in fossil fuels.

But the dominant driver is information technology. Joel Mokyr, an economic historian at Northwestern University, said one of its most important and least appreciated roles is the “great fake”: It enables “increasingly accurate lifelike representations of some kind of reality through analog or digital mimicry, what you could call virtualization.”

In 1850, he said, “the only way to listen to music was physical presence at a concert or play it yourself.” Then came player piano rolls, vinyl records, CDs and now streaming -- innovations that whittled the tangible contribution to music down to almost nothing.

At least a third of the value in a record, cassette or compact disc once went toward tangible capital, the manufacturers and distributors such as retail stores. Today, almost all of the value of a streamed or downloaded song goes toward intangible capital: the artist, the songwriter, the label, the publisher or the platform (such as Apple Inc.’s iTunes or Spotify Technology that distributes it.

WHERE CORPORATIONS AND CUSTOMERS MOVED IN 2020

In filmed entertainment, the pandemic has kicked similar dynamics into overdrive. Warner Bros.’ decision to release all its movies in 2021 simultaneously on the HBO Max streaming service (owned, like Warner, by AT&T Inc.) and in theaters signals the physical component of the movie experience will be permanently smaller.

In many boardrooms, companies converted to remote work using virtual meeting tools like Zoom -- a shift that Mokyr called technology’s greatest “fake” ever because it seeks to recreate in virtual form the physical relations between bosses, employees and customers.

One historical obstacle to internet retail adoption was that some advantages of the in-person shopping experience couldn’t be recreated. Amazon started with books because unlike a garment or an appliance, you don’t need to touch James Patterson’s latest bestseller to decide whether to buy it.

Consumer resistance to buying online has since steadily receded and the pandemic further softened it, in part because retailers have gotten better at mimicking the in-person experience.

Carvana, for example, lets a customer study 360-degree images of a used car’s exterior and interior, apply for and be approved for a loan online, then have the car shipped to her home or a nearby “vending machine” (essentially a narrow, multistory glass-walled garage). Sales boomed during the pandemic, proving many customers will buy a used car without driving it first. Anyone hesitating to buy eyeglasses online from Warby Parker can try them on a three-dimensional image of himself on some iPhones. Thanks to Peloton Interactive Inc., many fitness aficionados won’t return to the gym after the pandemic.

The shift from physical to virtual commerce went hand-in-hand with the rise of remote and contactless payments and the decline of cash. The virus prompted some bastions of cash such as casinos to introduce more cashless technology. The virus-driven shift to online naturally increased remote payments. For example, the “card not present” share of total credit card spending rose from about 40% in February to more than 50% in early December, according to JPMorgan Chase & Co.

For many merchants, the pandemic made that shift a matter of survival. Before coronavirus, the website of M. Flynn Jewelry, a boutique jeweler based in the south end of Boston, mostly helped “people to figure out if it was worth making the trip to see the store,” said co-owner Megan Flynn. “Now we’re seeing how important it is because people may not want to come in, for many different reasons.”

Since June, about 30% of the store’s sales have been transacted directly through the website or via text and telephone calls initiated over the site, compared with 3% a year earlier. Web visitors can ask a store employee to try on a piece of jewelry. Flynn’s clientele used to be almost entirely local. Now, some 20% come from outside the Boston area. They “might be looking for a certain designer [on the internet], they find it through us, and then start shopping with us.”

Until the pandemic, many merchants had resisted moving online believing “it took a lot of time, money, and technical capability,” said Shopify’s Padelford. “In fact, it doesn’t. The average company can be online in a single day,” and pay as little as $29 a month.

Through Shopify, a business can quickly set up a website with many of the same functions as Amazon without having to sell through Amazon. Its merchant count has nearly doubled in less than two years, according to Colin Sebastian, analyst at broker Robert W. Baird. They run the gamut from established brands such as Beyond Meat Inc. and Nestle to laid-off individuals in search of a side hustle.

The surge in the number of consumers, merchants and brands online creates what Sebastian calls a “network effect.” The more users there are, the more compelling it is for others to follow. “It would be surprising if we didn’t see the majority of that shift sustained beyond the pandemic,” he said.

That isn’t the only network effect. Another comes from the innovations merchants and technology suppliers have rushed to roll out. Thanks to them, the online experience got better on an almost daily basis since the pandemic began.

For example, early in the pandemic Flynn’s jewelry shop added an app to its website from Podium Corp. that lets customers place orders and receive invoices via text message.

Digitization doesn’t obviate the need for physical assets. Amazon’s U.S. capital spending in 2019 was more than any other company, according to the Progressive Policy Institute, a center-left think tank. Rather, it changes the sort needed.

Online stores invest primarily in technology and logistics such as fulfillment centers and delivery vehicles, not stores, offices or machinery. While retail stores are designed around customers who may browse multiple aisles in search of a few items, fulfillment centers are designed around employees handling items nonstop. They use labor and space more efficiently: Amazon’s sales per employee are 50% higher than Walmart Inc.’s .

This year, businesses spent more on almost everything related to logistics and technology and less on everything else.

The amount of net warehouse space absorbed by tenants through the first nine months was similar to last year, according to CBRE, while more office and retail space was vacated than leased. Air freight volumes are up this year even as passenger traffic is down sharply. Business spending on software and information technology rose in the third quarter from a year earlier, but almost every other type of capital spending fell.

Once a vaccine is widely administered and fear of the virus fades, some of this will reverse. The rapid return to restaurants every time restrictions have been lifted attests to the desire for physical presence, as does the yearning among many employees for brainstorming and gossip around the office coffee maker.

Mokyr cautioned dematerialization can’t continue indefinitely: “Diminishing returns works here as well. We can mimic reality, but we are not digital creatures ourselves, and ... our evolutionary background will continue to demand physical experiences.”

But perhaps not as much as before.

After the Sept.11, 2001 terrorist attacks, a predicted shift to videoconferencing and telecommuting didn’t materialize because the necessary technology was clunky and expensive. By contrast, the pandemic arrived when many workers already had high-speed internet and a device with a camera and video conferencing software.

Before the pandemic, roughly 5% of work days were spent at home, according to surveys of 15,000 Americans conducted by academics Jose Maria Barrero, Nicholas Bloom and Steven J. Davis. That had climbed to 50% in November, they reported in a paper for the Becker Friedman Institute, an economic research organization at the University of Chicago. Once the pandemic is over, respondents still expect to spend 22% of their work days at home.

The authors attribute the stickiness of remote work to, among other things, the investment employees and employers have made in the necessary equipment, and residual fears of physical proximity due to the pandemic. To this they add the network effect: “When several firms are operating partially from home, it lowers the cost for other firms and workers to do the same.”

They also credit innovations such as collaboration software that enhance the experience. A different paper co-authored by Bloom, Davis and Yulia Zhestkova found that 1% of patents filed early in the pandemic related to working from home, nearly double the pre-pandemic share.

In this photo released by Indonesian Foreign Ministry, Indonesian people who arrived from Wuhan, China, are sprayed antiseptic at Hang Nadim Airport in Batam, Indonesia Sunday, Feb. 2, 2020. Indonesians evacuated from Wuhan, the Chinese city at the c

Nationwide Mutual Insurance Co., in Columbus, Ohio, illustrates the shift. Shortly after the pandemic hit, Nationwide had 98% of its 28,000 employees working from home. The initial impetus was safety, but chief executive Kirt Walker said it accelerated pre-existing plans to rely on virtual operations. Before the pandemic roughly 15% of employees worked from home and the company now plans for half to eventually do so permanently.

Walker used to hold town halls with employees in the auditorium at the company’s Columbus headquarters, which can hold up to 350. Now, he has regular companywide broadcasts attended by thousands of employees. They submit questions and vote on which Walker should answer using Slido, a live-polling application startup just bought by Cisco Systems Inc.

“We looked at major occurrences in the U.S.: the Great Depression, recessions, world wars, and what we found is that Americans reacted in two different ways,” Walker said. “First, they were forced to try new things and in many ways. Those new things became habits. Two, people became more value-conscious.”

Nationwide is closing 17 offices across the country, keeping four main campuses, reducing its real estate needs by roughly 1.1 million square feet and saving about $100 million, which it says will be used to reduce policyholders’ premiums.

Some companies, Mr. Walker said, wrote off 2020 as a lost year. “For us it was an accelerator, and got us closer to some long term objectives.”