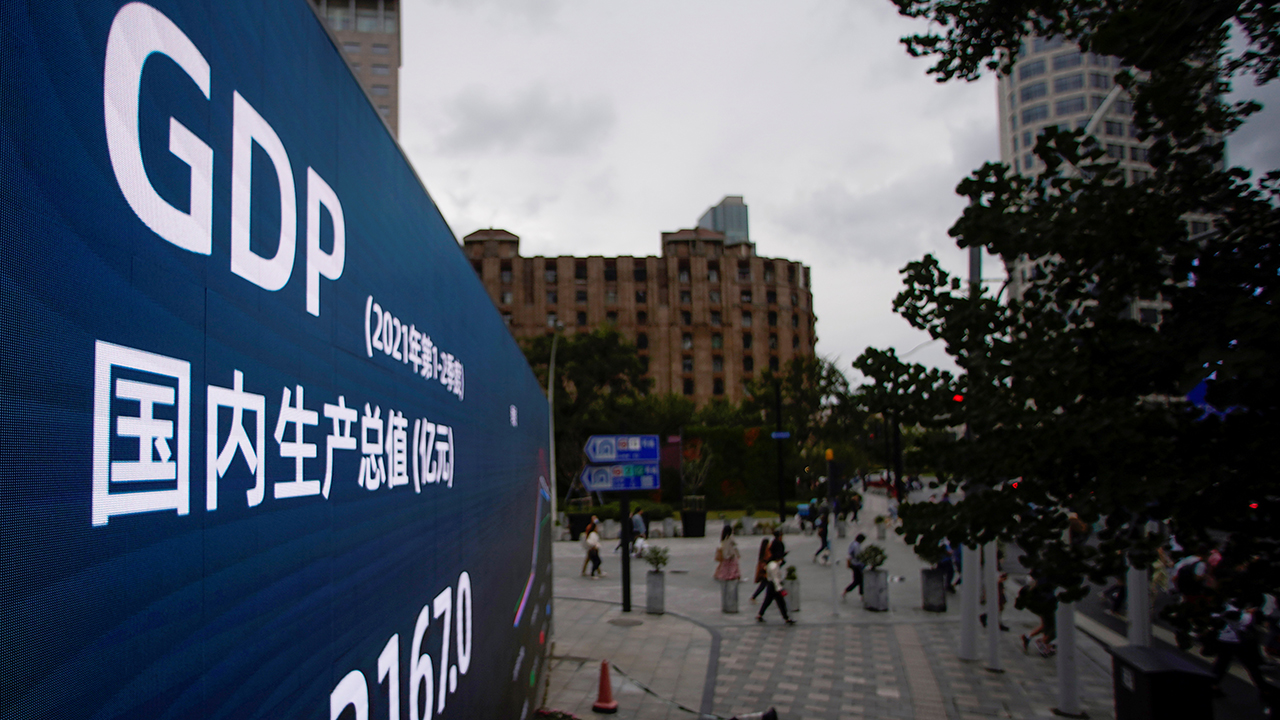 China's economy hit its slowest pace of growth in a year in the third quarter, hurt by power shortages, supply chain bottlenecks, and major wobbles in the property market and raising pressure on policymakers to do more to prop up the faltering recovery.

Data released on Monday showed gross domestic product (GDP) grew 4.9% in July-September from a year earlier, the weakest clip since the third quarter of 2020 and missing forecasts.

The world's second-largest economy is facing several major challenges, including the China Evergrande Group debt crisis, ongoing supply chain delays, and a critical electricity crunch, which sent factory output to its weakest since early 2020, when heavy COVID-19 curbs were in place.

An electronic display showing the China GDP indexes is seen on a street in Shanghai, China October 16, 2021. REUTERS/Aly Song

"The domestic economic recovery is still unstable and uneven," said National Bureau of Statistics (NBS) spokesperson Fu Linghui at a briefing in Beijing on Monday.

China's economy had staged an impressive rebound from last year's pandemic slump thanks to effective virus containment and hot overseas demand for the country's manufactured goods. But the recovery has lost steam from the blistering 18.3% growth clocked in the first quarter of this year.

"In response to the ugly growth numbers we expect in coming months, we think policymakers will take more steps to shore up growth, including ensuring ample liquidity in the interbank market, accelerating infrastructure development and relaxing some aspects of overall credit and real estate policies," said Louis Kuijs, head of Asia economics at Oxford Economics.

A Reuters poll of analysts had expected GDP to rise 5.2% in the third quarter.

The weak numbers sent the yuan and most Asian stock markets lower amid broader investor concerns about the world economic recovery.

Global worries about a possible spillover of credit risk from China's property sector into the wider economy have also intensified as major developer China Evergrande Group (3333.HK) wrestles with more than $300 billion of debt.

Chinese leaders, fearful that a persistent property bubble could undermine the country's long-term ascent, are likely to maintain tough curbs on the sector even as the economy slows, but could soften some tactics as needed, policy sources and analysts said.

Meanwhile, the industrial sector has been hit by power rationing triggered by coal shortages, as well as environmental curbs on heavy polluters like steel plants and floods over the summer.

Overall industrial output rose just 3.1% in September from a year earlier, marking the slowest growth since March 2020, during the first wave of the pandemic.

Bucking the negative trend, retail sales grew 4.4%, faster than forecasts and the 2.5% growth in August, and the surveyed nationwide jobless rate fell from 5.1% to 4.9%.

"Most of the (negative) factors are policy-driven... the economy is having a lot of pain points and these pain points are not going away soon because policies are here to stay, and therefore it will continue into 2022," said Iris Pang, chief economist for Greater China at ING.

On a quarterly basis, growth eased to 0.2% in July-September from a downwardly revised 1.2% in the second quarter.

On Sunday, People's Bank of China governor Yi Gang said the economy is expected to grow 8% this year.

"At present, China's fiscal strength is continuously increasing, and there is still relatively big room for monetary policy," said the NBS's Fu.

Still, the central bank is expected to remain cautious about monetary easing due to worries about high debt and property risks.

Analysts polled by Reuters expect the People's Bank of China to refrain from attempts to stimulate the economy by reducing the amount of cash banks must hold in reserve until the first quarter of 2022.