The New England Patriots, a beloved NFL team no stranger to controversy, created even more when it severed ties with wide receiver Antonio Brown after a second woman accused him of sexual misconduct.

While the team had been criticized for signing Brown earlier in the month, releasing the star player proved no relief on social media platform Twitter, where users brought up charges still pending against owner Robert Kraft -- accused of soliciting prostitution at a Florida massage parlor last January -- as well as older scandals like Deflategate.

NFL STARS' INJURIES POSE LARGER RISK TO FANTASY FOOTBALL THAN TV RATINGS
BASEBALL ATTENDANCE DROPS AT MLB STADIUMS FOR FIFTH STRAIGHT YEAR
HORSE RACING ON THE DECLINE? NOT IN THIS STATE, ACCORDING TO LOCAL INDUSTRY LEADER

Another name that trended Friday night on Twitter was Aaron Hernandez, the former Patriots tight end who was convicted of murdering his friend Odin Lloyd in 2013 and later killed himself in prison.

Those off-the-field issues aren’t the only ones that have dogged New England in recent years – there have been plenty of issues with how team members have conducted themselves during games.

From Spygate -- when it was revealed the Patriots were secretly filming the St. Louis Rams before Super Bowl XXXXVI in 2002 -- to Deflategate, when the Patriots were alleged to have let some air out of footballs during the 2014 AFC Championship Game, which led to quarterback Tom Brady being suspended four games in the 2016 season, criticism has been plentiful.

Underneath the acrimony, however, the Patriots are still one of the NFL’s most popular teams. The franchise was valued at $4.1 billion by Forbes magazine with revenue of $600 million; Brady sold the most officially licensed NFL player products and merchandise from March 1, 2018, through February 28, 2019, according to the NFL Players Association; and the team overall is second in the NFL in jersey sales.

“When you look back at the business that the Kraft family has built -- both on and off the field -- there’s been some hiccups along the way, and part of the hiccups are the way they’ve reacted and not let them linger,” said Joe Favorito, a veteran sports media consultant and Columbia University professor.

The controversy surrounding Brown, he said, is unlikely to diminish the Patriots brand.

"These are kind of blips along the way, which happen with almost every pro team," he said. "The brand still withstands the test of time.” 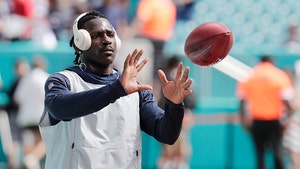 One franchise that tops the Pats in value, revenue and merchandise sales is the Dallas Cowboys, known as America’s Team. Forbes valued Jerry Jones’ team at $5.5 billion with $950 million in revenue.

Dallas’ brand is still strong from its 1970s and 90s dynasties when it won a record five Super Bowls, but it's had its own share of issues.

The team has overcome them in part because of the "constant forward thinking of (owner) Jerry Jones and (his son, CEO) Stephen Jones," Favorito said. "They have tremendous alumni, who are great brand ambassadors for them, and like the Yankees, there are certain keystone brands when you go around the world and you say the name, they still stand up. They’re constantly in the mix and their brand speaks for itself.”

Both the Cowboys and the Patriots provoke passion, and the New England team has become a target ""because of who they are and what they’ve built," Favorito said. "Like the Cowboys, either you love them or you hate them. I think there are probably teams that do things that fly below the radar that don’t get noticed because they’re not the elite brand.”