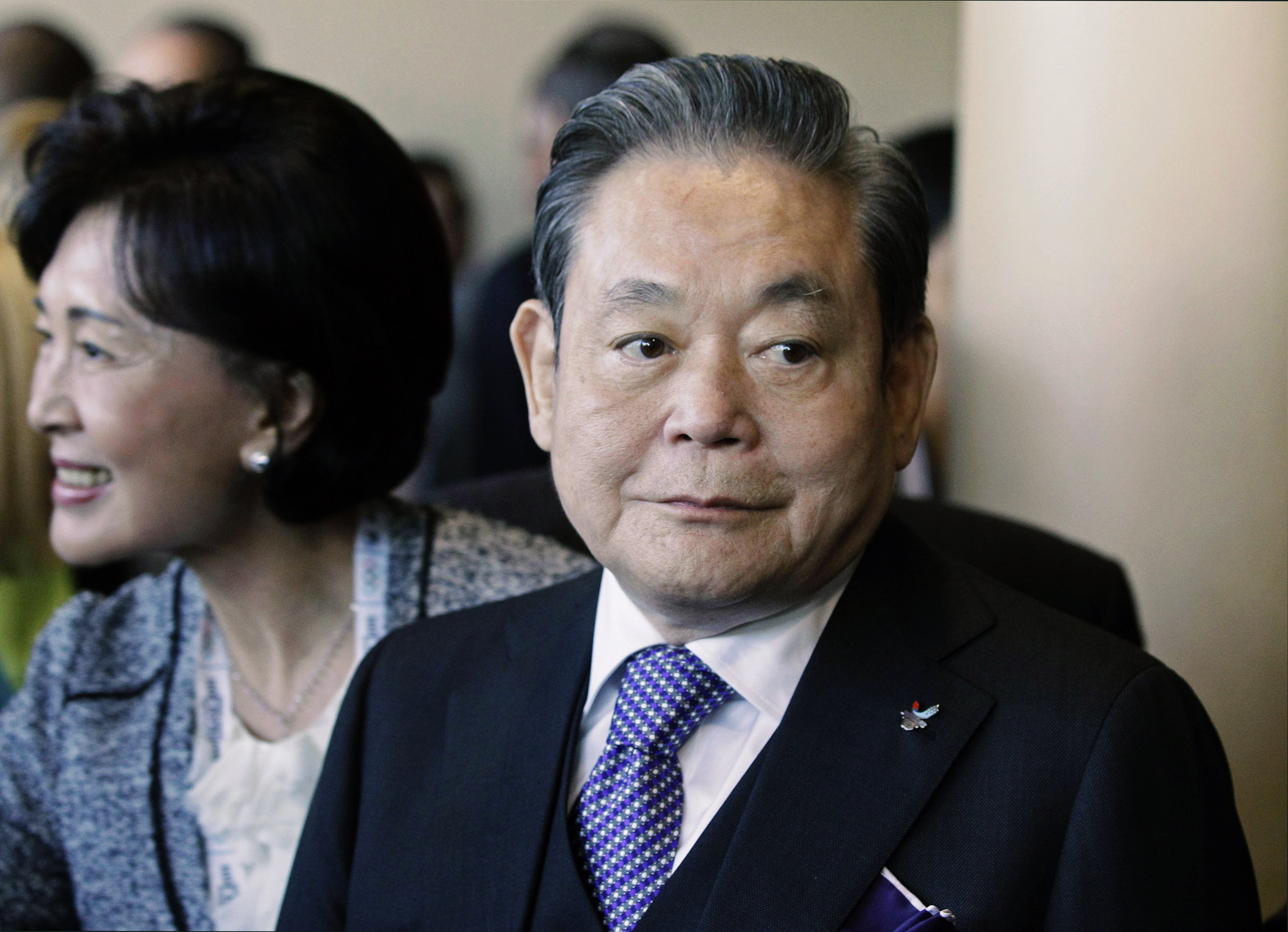 Lee Kun-Hee, the ailing Samsung Electronics chairman who transformed the small television maker into a global giant of consumer electronics, has died. He was 78.

A Samsung statement said Lee died on Sunday with his family members, including his son and de facto company chief Lee Jae-yong, by his side.

Lee Kun-Hee had been hospitalized since May 2014 after suffering a heart attack and the younger Lee has run Samsung, the biggest company in South Korea.

“All of us at Samsung will cherish his memory and are grateful for the journey we shared with him,” the Samsung statement said. “Our deepest sympathies are with his family, relatives and those nearest. His legacy will be everlasting.”

Lee Kun-hee inherited control from his father and during his nearly 30 years of leadership, Samsung Electronics Co. became a global brand and the world’s largest maker of smartphones, televisions and memory chips. Samsung sells Galaxy phones while also making the screens and microchips that power its rivals, Apple’s iPhones and Google Android phones.

Lee leaves behind immense wealth, with Forbes estimating his fortune at $16 billion as of January 2017.

His death comes during a complex time for Samsung.

When he was hospitalized, Samsung’s once-lucrative mobile business faced threats from upstart makers in China and other emerging markets. Pressure was high to innovate its traditionally strong hardware business, to reform a stifling hierarchical culture and to improve its corporate governance and transparency.

Samsung was ensnared in the 2016-17 corruption scandal that led to then-President Park Geun-hye’s impeachment and imprisonment. Its executives, including the younger Lee, were investigated by prosecutors who believed Samsung executives bribed Park to secure the government’s backing for a smooth leadership transition from father to son.

In a previous scandal, Lee Kun-Hee was convicted in 2008 for illegal share dealings, tax evasion and bribery designed to pass his wealth and corporate control to his three children.

The late Lee was a stern, terse leader who focused on big-picture strategies, leaving details and daily management to executives.

His near-absolute authority allowed the company to make bold decisions in the fast-changing technology industry, such as shelling out billions to build new production lines for memory chips and display panels even as the 2008 global financial crisis unfolded. Those risky moves fueled Samsung’s rise.

Lee was born Jan. 9, 1942, in the southeastern city of Daegu during Japan’s colonial rule of the Korean Peninsula. His father Lee Byung-chull had founded an export business there in 1938 and following the 1950-53 Korean War, he rebuilt the company into an electronics and home appliance manufacturer and the country’s first major trading company.

Lee Byung-chull was often called one of the fathers of modern industrial South Korea. Lee Kun-Hee was the third son and his inheritance of his father’s businesses bucked the tradition of family wealth going to the eldest. One of Lee Kun-Hee's brothers sued for a bigger part of Samsung but lost the case.

When Lee Kun-Hee inherited control from his father in 1987, Samsung was relying on Japanese technology to produce TVs and was making its first steps into exporting microwaves and refrigerators.

The company was expanding its semiconductor factories after entering the business in 1974 by acquiring a near-bankrupt firm.

A decisive moment came in 1993. Lee Kun-Hee made sweeping changes to Samsung after a two-month trip abroad convinced him the company needed to improve the quality of its products.

In a speech to Samsung executives, he famously urged, “Let’s change everything except our wives and children.”

Not all his moves succeeded.

A notable failure was the group’s expansion into the auto industry in the 1990s, in part driven by Lee Kun-Hee’s passion for luxury cars. Samsung later sold near-bankrupt Samsung Motor to Renault. The company also was frequently criticized for disrespecting labor rights. Cancer cases among workers at its semiconductor factories were ignored for years.

In 2020, Lee Jae-yong declared heredity transfers at Samsung would end, promising the management rights he inherited wouldn’t pass to his children. He also said Samsung would stop suppressing employee attempts to organize unions, although labor activists questioned his sincerity.

South Koreans are both proud of Samsung’s global success and concerned the company and Lee family are above the law and influence over almost every corner of society.

In 2007, a former company lawyer accused Samsung of wrongdoing in a book that became a best seller in South Korea. Lee Kun-Hee was subsequently indicted on tax evasion and other charges.

Lee resigned as chairman of Samsung Electronics and was convicted and sentenced to a suspended three-year prison term. He received a presidential pardon in 2009 and returned to Samsung’s management in 2010.