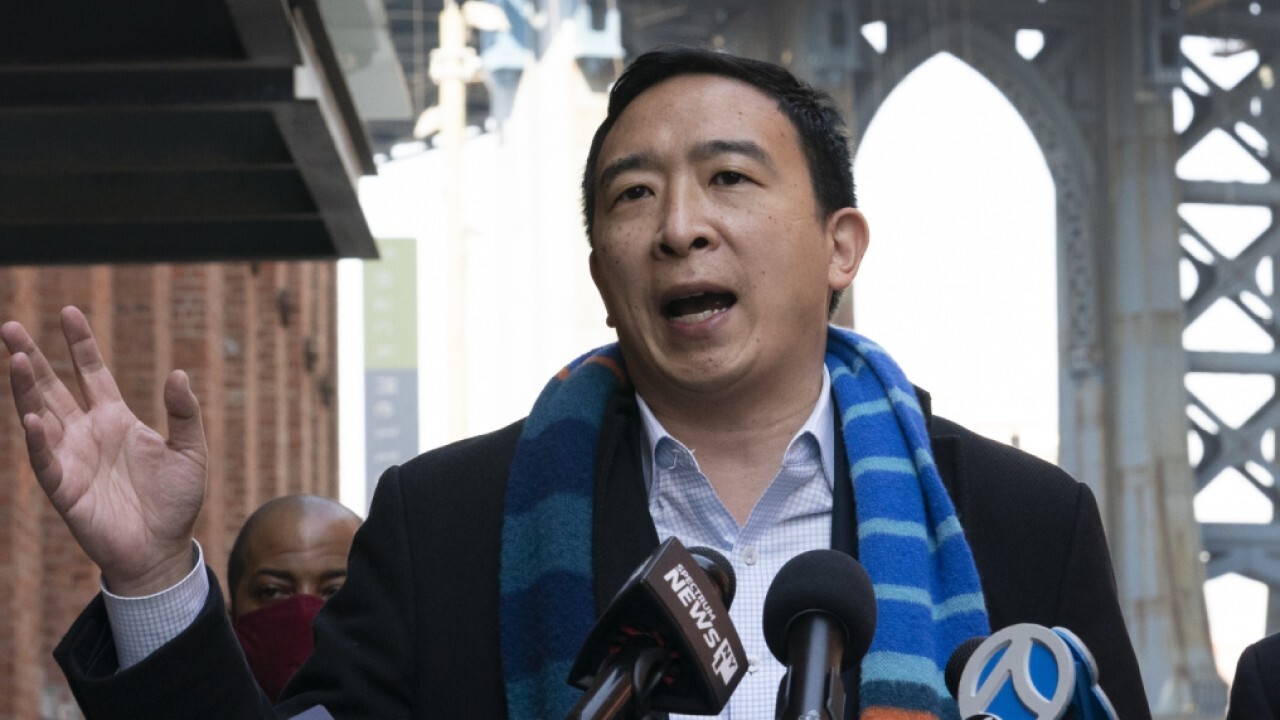 With the New York City mayoral primary campaign in the home stretch, the Democratic front-runner in most polling is taking to the airwaves.

YANG LEADING IN THE POLLS WITH NYC MAYORAL PRIMARY NEARING

Yang’s campaign highlights that the initial buy to run the spot on broadcast and cable television is $1.5 million, which they say complements an already existing digital effort. Yang officials tout that "our campaign will be among the most visible on the airwaves in May and June."

"People give me hope," the candidate says in his ad. "Essential workers, food entrepreneurs, the kids in our schools. They are why I'm running for mayor."

"I am sick and tired of hearing what we cannot do in New York City," Yang emphasizes before outlining his proposals.

They include "cash relief to help people get back on their feet. We need to get schools open so kids can learn and parents can get back to work. We need a people's bank to help small businesses grow."

Yang ends the spot stressing that "we need new leadership. We need new ideas." And he adds that "hope is on the way."

Thanks to the national attention he grabbed in 2019 and early 2020 as his long-shot campaign for the Democratic presidential nomination briefly soared, Yang has grabbed outsized attention among the large field of mayoral contenders.

FILE - In this March 11, 2021 file photo, Democratic mayoral candidate Andrew Yang holds a news conference in the Dumbo neighborhood of New York. Yang, a businessman who gained fame during his quixotic 2020 presidential run, is a leading contender fo

And last week New York City comptroller Scott Stringer launched a $1 million ad blitz. Stringer, considered one of the leading contenders for the Democratic nomination, appeared to suffer a slight setback last week after he was accused of sexually assaulting a campaign volunteer two decades ago.

Brooklyn Borough President Eric Adams, who led Yang in a poll released this week, has yet to go up with TV ads. Adams, who rose to the rank of captain during his two-plus decades in the New York City Police Department and who was the first Black person elected borough president of Brooklyn, has nearly $8 million of unspent money in his campaign coffers that can be used to blanket the airwaves in the closings weeks ahead of the June 22 primary.

The ads could be crucial since much of the field of contenders is unknown to most primary voters.

The city will hold primaries for both major political parties, but the winner of the Democratic contest will be considered the front-runner in November's general election, as the city is a Democratic stronghold.